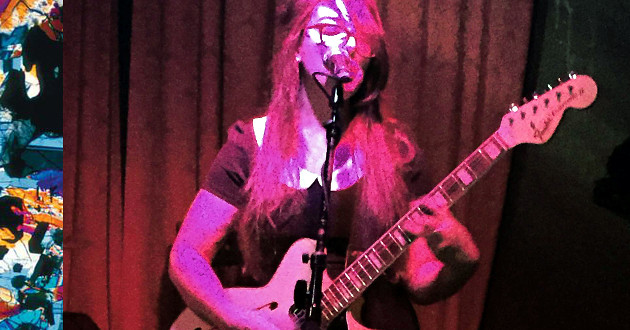 Geology, as Ellis Boyd Redding taught us, is the study of time and pressure. If that is enough to shape one kind of rock, Clicky Clicky wondered, would it work on another?

Well, that was a long, dramatic pause, yeah? We refer, of course, to the gaping crevasse of time between the last installment of Regolith, our 30-day, tripartite songwriting challenge we introduced here a year ago, and this new one. As much as we are pleased to announce the return of the feature, we are even more pleased to have as our latest participant Boston scene veteran Supriyah Gunda, proprietress of indie rock concern Digital Prisoners Of War, former bassist for Boston indie pop heroes Bent Shapes, and formerly of more rock outfits than is practical to enumerate here. Digital Prisoners Of War self-released its debut EP Casually Defying Physics last fall, four tracks fizzing with hooks and featuring Ms. Gunda singing and playing everything but the drums. Folks will be interested to learn below about the songs whose drum tracks were laid down by a legendary drummer, but the short stack of tunes has much to offer on its own terms, from the big anthem "Last Resort Method" to the steady swing of the three-quarter timed "Kill Whitey." You can stream the entire EP via the embed at the foot of the piece. In our intake interview for Regolith 3 below we get the basics from Gunda -- where she's from and where she's been -- and make inquiries about how she plans to attack our challenge, which asks aspirants to commit to writing and recording as much new material as they can in a one-month span. The results of this challenge are then posted over at the Clicky Clicky Bandcamp page. Gunda's month as our artist-in-her-own residence is already underway, and we'll check in with her again in a couple weeks for a progress report, and then present the fruits of her labor a couple weeks after that, as that is how Regolith rolls. In the meantime, after reading our brief interview with Gunda below, we invite you to revisit the results from Regolith artists one and two, Reuben Bettsak and Sean Tracy, whose recorded work is here and here respectively. -- L. Tiburon Pacifico

Clicky Clicky: Hey Supriya. Where are you from, and where do you currently reside?

Supriya Gunda: The long answer is that I've never truly felt "from" anywhere, and I currently reside in a state of proto-Nietzschean metaphysical homelessness. Short answer: I'm from Danville, New Hampshire, and currently reside in Boston, Massachusetts.

CC: What are your musical endeavours, currently?

SG: Right now I am Digital Prisoners Of War, which is a moniker that has been used as a blanket statement for my solo endeavors for... about 54.8% of my life at this point, which is terrifying. I released an EP called Casually Defying Physics in the fall, recorded with Justin Pizzoferrato (Kim Gordon, Potty Mouth, Speedy Ortiz, Krill, i.e. one seriously prolific motherfucker) at Sonelab in Easthampton, Massachusetts. This is the first song on the EP, "Béla Bar Talk." It is about, like, an amalgamation of common themes, including the Hungarian composer and ethnomusicologist Béla Viktor János Bartók, drunken one-off hookups and a deeply pervasive sense of existential loneliness. Murph from Dinosaur Jr. ended up playing drums on this track, I played all the other things alone. Existentially alone.

CC: What is happening with Digital Prisoners Of War right now?

SG: Currently, I have a proper live band featuring Tommy Palmer on bass (Babydriver, Hats And Glasses, Spirit Kid) and Dan Madden on drums (Four Eyes, Laika's Oribit, Daniel Striped Tiger). They are my Grohl and Novoselic. Our next show is March 18 at O'Briens in Allston, Mass. with Julius Earthling, Laika's Orbit and Grave Ideas. Hopefully tour this summer. Hopefully a full length before then. Hopefully more!

CC: What bands have you played in previously?

SG: Most recently I've played in Lost Twin and Bent Shapes, less recently played in Hats And Glasses, Thousands, Earth People Orchestra... as with most Boston area musicians, the list could go on forever. Honestly, at this point, I don't want to be in anyone's band. I want to be in MY band.

CC: So what instruments do you play? When did you start playing them?

SG: Not drums. Constantly learning that the hard way. I do however have plenty of drum machine apps for emergencies.

CC: And how long have you been writing music?

SG: Well, the earliest archive of music I've written is saved to floppy disk, if that's any indication.

CC: What are your songwriting influences? Do you feel like there's an influence on these songs that is obvious to you but might not be necessarily apparent to a listener?

SG: I'm sure it's the opposite -- a listener is probably far better equipped to spot my influences than I am. I was recently asking for help choreographing something for a video, and I asked for something of the same ilk as a blackmetal Kate Bush, so maybe that's an influence. So many of my peers are influences, maybe not musically, but it's really an inspiration to see my friends waking up and doing it, not eating or sleeping for it, working-after-work for it, sacrificing any sense of stability for it, just needing it. It's an influence to see an influx of women coming to the forefront right now and saying, "fuck the man's songs, I'm writing/recording/producing/promoting my own." In that way, sooo many of my buds are an influence. You're probably seeing their names buzzing around all over your social media feeds right now. You'll probably keep seeing their names for years to come.

CC: How would you describe your songwriting (not recording) process. Are the songs conceived of first, or planned out? Or is the process more organic, with single chords or melodies developing into parts, which then develop into songs? Or do you have a back catalog of riffs/parts/progressions that you mix and match until they find a home?

SG: I get anxious, I get a song stuck in my head that doesn't exist yet, and I try my damnedest to get it out of there so I can get some damn peace and quiet.

CC: Do you normally write your songs alone, or are you used to writing with others? Will this project change the way you typically write?

SG: I normally write songs very, very alone. So this project actually introduces a third-party influence that I don't usually have -- you.

CC: Where will you be doing your writing and recording for this project?

SG: Under a blanket, primarily.

CC: What are your goals for this?

SG: To be forced to work with limitations. The more crayons in your crayon box, the less creative you need to be. I just need a couple crayons and a hard deadline and I'll feel free. Attachment = root of all suffering, et al.

Gunda's next Digital Prisoners Of War shows are doozies. As mentioned supra, this Wednesday the act is on the bill for the big Julius Earthling EP release show at O'Brien's Pub in Allston Rock City [deets]. And on March 23 Digital Prisoners Of War support indie pop royalty in the form of Radiator Hospital at an undisclosed location in the Greater Boston area. Check the details of that gig here maybe? Be sure to keep an eye out for Regolith blog post A3E2 (that is, "Artist Three, Episode Two") coming in a couple weeks.