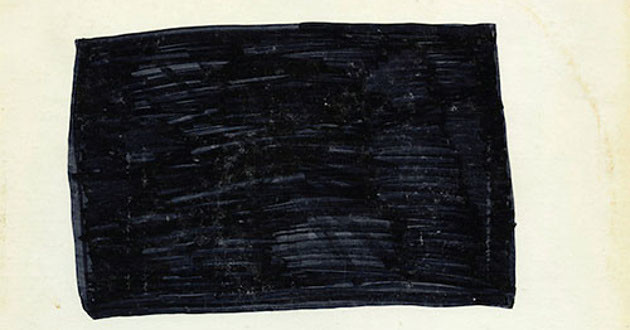 >> The name Paul De Jong is perhaps lost on many, especially as the heyday of the stunning project with which he made his name becomes increasingly remote. Even saying "Mr. De Jong is one of the main two dudes from The Books" will likely need to be followed up with "no, no, the other dude." But indeed he is the amazing cellist and curator of found sounds whose work remarkably colored The Books' brilliant compositions. Notably, De Jong will next month release his first solo effort, the 12-song set If, which presents the first new music we've heard from De Jong in five years. If's proverbial apple does not fall far from the tree, as two preview tracks indicate there is plenty of smart music and solid wonder yet present in De Jong's musical world. Lead preview track "Auction Block" opens as a pastoral instrumental, complete with samples of crickets chirping, while gentle piano figures waft under fiddle playing that transforms from tentative trills to a full-on hoe-down groove. Sturdy percussion tracks and De Jong's characteristically absurd audio samples take hold of the composition and steer it toward an indeterminate conclusion, reminding us that The Books never provided answers so much as they offered incredibly beautiful questions. A video for "Auction Block" was premiered today by NPR and you can watch it right here. A second preview track, "This Is What I Am," is significantly more dense, and perhaps to an extent that will surprise fans, as there is little open space for DeJong to interject into the composition the awe and whimsy people associate with his work. By no stretch is it an unsatisfying song, however, and repeated listens reveal stacked depths of intrigue tucked among the cycling drum fills and swelling voices. Interestingly, the tune's title is perhaps a sidelong declaration in response to the startlingly dark cut "I Am Who I Am", a highlight of The Books' final record. Temporary Residence Ltd. will release If April 28 on vinyl, CD and (presumably) as a digital download. A 200-piece limited-edition vinyl pressing comes on black media, the "standard edition" is pressed to amber media, and you can pre-order your copy right here (note: pre-orders ship out April 14). We reviewed The Books' final record The Way Out here in 2010.

>> Hop Along burst onto the scene a few years ago on the strength of its swaying belter "Tibetan Pop Stars," one highlight from the then-trio's electrifying debut LP Get Disowned. The set was a perfect showcase for the ragged, desperate singing of Philadelphian Frances Quinlan, and this blog was particularly taken with a deeper cut on Get Disowned, the more subdued and melodic "Laments," which we named one of our favorite songs of 2012. The song's progressive structure, delicate pianos and percolating melody proved Hop Along packed as much grace as it did power. Both of these are on full display in the fantastic new song "Waitress," a preview track from Hop Along's forthcoming sophomore set Painted Shut. Between the release of the two records, Hop Along added ex-Algernon Cadwallader guitarist Joe Reinhart to the lineup fronted by Ms. Quinlan on guitar, which includes brother Mark Quinlan on drums and Tyler Long on bass. Mr. Reinhart's sparkling guitar-playing shines brightly in the right channel of "Waitress," but there is still plenty of room for Frances' voice to soar. Stream the utterly exhilarating rocker "Waitress" via the Soundcloud embed below. Another change for the band is it signed with midwestern indie giant Saddle Creek to release Painted Shut; the band's debut was released on the Algernon dudes' own Hot Green imprint. The 10-song Painted Shut is slated for release May 5, but pre-orders will ship April 21. To say the record is hotly anticipated is an understatement: a deluxe edition of the LP pressed to white-with-pink-haze media sold out in hours. Fortunately, Painted Shut can still be pre-ordered here on vinyl, CD and as a digital download. In case you missed it (or didn't check the CC Facebook page that day), Ms. Quinlan recently partnered with Philly emo heroes The Weaks to record a rocking cover of Songs:Ohia's "Peoria Lunchbox Blues" for a Jason Molina tribute comp; you can stream that jam right here. Hop Along heads out on tour at the end of March supporting run of a dozen dates toplined by Philly scenemates The War On Drugs; the band embarks on its own three-week headline tour the day Painted Shut is released. Look for your town on the band's own list of dates right here.