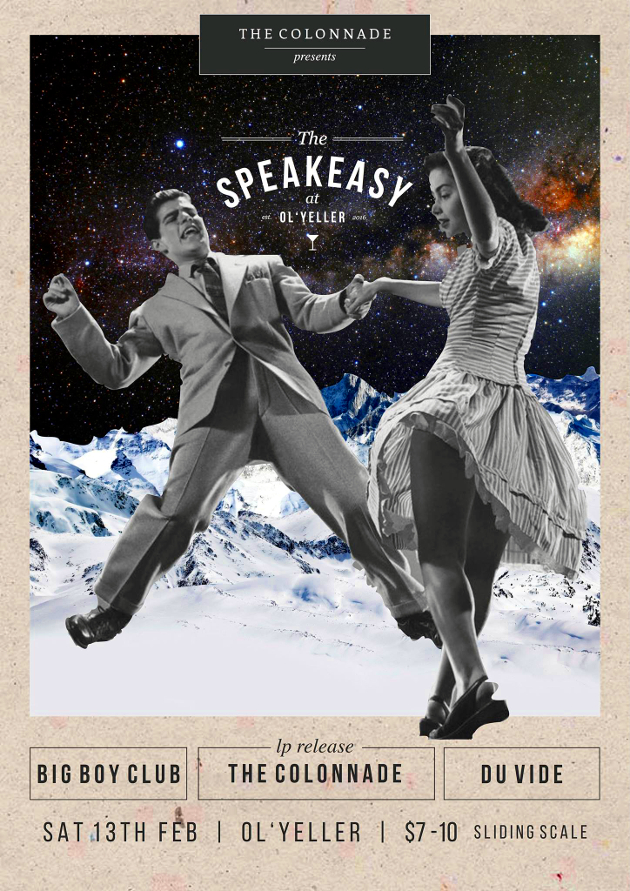 Attentive readers will recall that we premiered here last month the final third of Boston indie-pop upstarts The Colonnade's stirring debut LP Femme. The long-player is among the stronger introductory statements we've heard in some time, and features 10 whip-smart, widescreen, and slightly off-kilter guitar-pop numbers set off by three tasteful and artsy interludes. Clicky Clicky, never content to simply catalog the now-sounds of today and tomorrow, are pleased to co-present the band's release gig tomorrow night at Ol' Yeller in Allston Rock City.

The Colonnade are joined by two young acts also poised to leave their stamp on 2016: indie pop luminaries Du Vide and Big Boy Club. The former act is fresh off an appearance at Clicky Clicky's December Winter Ball at O'Brien's, where its uneasy but uncluttered guitar-tistry was well received. Du Vide picked up the Clicky Clicky seal of approval earlier that same month when we appraised its recent Clutter EP right here. Big Boy Club is more of an unknown quantity here in these electronic pages, but we do know the combo features the talents of the heroic rhythm section of Clicky Clicky faves Elizabeth Colour Wheel. While probably the slackest of the cluster of bands orbiting thatlatter group and Dent, BBC's Joe Sutkowski proves himself an adept songwriter whose talents can't be obscured by the band’s goofy streak. We recommend you check out the tune "TRU To The Team" and feel the feels.

BUT WAIT THERE'S MORE. Tomorrow's event promises a "speakeasy" theme, in line with The Colonnade's classic, monochrome aesthetic. Punters with a thirst will be able to partake of specialty, song-themed cocktails (The Adolescent, The Commemoration, The Modern Taste) made to order while live jazz selections are performed by friends and collaborators between sets. Not familiar with the venue? Ask a punk or hit us up; additional details are at this Facebook event page. And before hitting the gig, get into its headspace by streaming Femme via the embed below, and click through to acquire a digital copy for the nice price of three dollars American. -- Dillon Riley