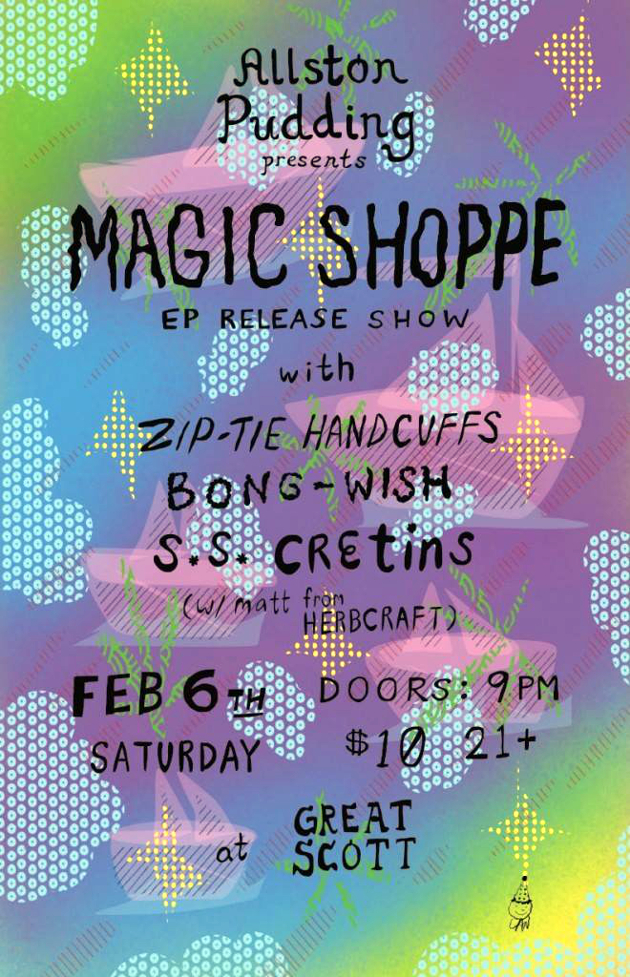 Maybe you're feeling it? It's like the opposite of a disturbance in The Force: the mesmerizing infinity vibes of Interstellar Car Crash, the new EP from Boston-based quintet Magic Shoppe. The short stack's four tracks bristle with tambourine-bedazzled and dreamy, Rolling Stones-inspired grooves covered in rich and limitless reverbs and guitar effects. At times, the songwriting brings to mind The Brian Jonestown Massacre at Their drugged and Satanic Majesties Requested-best, but the clarity of the performances and updated production outpaces much of BJM's more erratic moments. EP opener "Salventius" interrupts itself after a minute-and-a-half with delightfully warped shoegaze chords, while lead preview track "City Alight" grooves on a sultry guitar line (check out the video for the stirring tune right here). The highlight of the EP is the title track closer, which takes a handful of mid-tempo chords and rides along a drugged and autumnal crest. It's like the first rays of sunshine, an epiphany arriving through the blinds with the morning after a life-changing bender, the taste of too many cigarettes and the worn smell of a leather jacket meaningfully lingering.

Toronto's Optical Sounds releases Interstellar Car Crash as a digital download and white 10" vinyl disc Friday, and Magic Shoppe celebrates accordingly Saturday at Great Scott in Allston Rock City, with support coming from Zip Tie Handcuffs, Bong Wish and S.S. Cretins. Full details for the evening are right here; there are additional release shows in Philadelphia tomorrow at Kung Fu Necktie and Brooklyn Thursday at Palisades. Stream the aforementioned "City Alight," as well as tracks from the supporting acts, via the embeds below. Click here to buy Interstellar Car Crash either as a tangible flat thing or a virtual packet of ones and zeroes. Magic Shoppe first formed in Boston in 2010 and was mothballed for a time before re-constituting itself in 2014, but has still produced an estimable catalogue. The band has an LP, two other EPs and at least one comp appearance under its belt to date. -- Edward Charlton