And Clicky Clicky Command Central is back online once more, and it is snowing once again. We'll see how long this laptop can hold out before something else goes kaput. If anything it has made me appreciate the greatness of this machine's rock-making capacity.

While operations were down I watched some neglected Netflix stuff, namely The Station Agent, which gets five thumbs up from me, and Kill Bill v. 1, which I also liked a very great deal. I recommend both, though I imagine I am much further behind the curve than my readership on the subject of movies.

The always-great Bradley's Almanac, as I suspected, was the first place I found MP3s of the Teenbeat 20th anniversary party, including several songs from a sort of surprise set by label honcho Mark Robinson's excellent indie pop trio Unrest. Check it out.

The Monkey has done a little virtual sprucing up. Why not pop over to see what he's up to?

The other day Gawker pointed us to an imbecilic assertion made by a woman who claims that Emo is "associated with promoting the cutting culture," meaning the subgroup of disturbed people who harm themselves by cutting themselves (think the woman in the movie Secretary). So dumb. Here's the link, but I wouldn't bother.

"So what else you got?"- Dinosaur Jr.

The laptop goes back to Dell tomorrow, so here is another post to tide you over until I get my stuff back on track.

Many of my all-time favorite records were released on Spin-Art Records. By the time Virginia-based indie-poppers Poole issued their first full-length on Spin-Art they had developed an addiction to sugar that over-sweetened much of their material with too much gloss, too-perfect harmonies, and not as much atmosphere as their excellent earlier 7" record "Mary Shakes Her Hair" b/w "Car"/"Meredyth on a Monday" (Spin-Art #15). These three songs were all either re-recorded or heavily remixed and remastered for the "Alaska Days" full-length (Spin-Art #44, which featured head Lily Kurt Heasley on one track playing, ahem, water) that I was a bit disappointed with them. This despite the presence of a lot of other great power pop on the record that I hadn't heard before, and that I still like to listen to nowadays.

The final track on Poole's 7" release was committed to tape at the same studio as the Lilys' amazing first record which I often discuss here. The studio, Cat Box, was based in Lancaster, PA, where at least one of the Spin-Art founders was educated at Franklin & Marshall (which soon after served to educate Haywood bassist Jeff Paretchan as well, and host the final Garden Party show prior to the formation of Haywood). So I suppose there was a relationship there between the Spin-Art guys and the studio guy, one of the Heitmullers, who had his own band Suddenly, Tammy! and is aquaintanted with the Monkey. Anyway, before I finally tracked down the Poole 7" earlier this month for my own collection, I had a cassette dub of it I made at Wesleyan some 10 years ago. Ripped from that cassette, here is Poole's "Meredyth on Monday," featuring background vocals by Suddenly, Tammy!'s Beth Sorrentino.

PopMatters last month published not one but two Mendoza Line interviews, one with Shannon McArdle and the other with Peter Hoffman. Both are quite enjoyable and worth your time. I highly recommend all the Mendoza Line recordings, although I have still yet to obtain "I Like You When You Are Not Around" and "Fortune." And come to think of it, I don't have "If they Knew This Was The End," but I think that is a greatest hits kind of thing, and I have most of the songs on other releases.

Haywood Update: Rob V tells me that mixing was slated to begin today on the new Haywood record, and should be completed in early March. Longtime readers will recall this is a studio project only, and Haywood, to my knowledge, has no plans to tour to support the record. They may not even gig, tho I suspect they will play a gig or two.

"Saturday I jotted down some words I thought." - Built To Spill

The great hardcore bands, the pantheon, all had vocalists with a distinct sound. Some well known: Rollins; Mackaye. Some less so, but equally deserving of attention: Unity/Uniform Choice's Pat Dubar; Judge's Mike Judge; Burn/Orange 9MM's Chaka. I received a copy in the mail this week of a hardcore record I've sought to reclaim for a while, namely Orange 9MM's debut eponymous EP. This record includes the tracks "Driver;" "Cutting and Draining"; "Dry;" and "Can't Decide." It is really heavy, but also spare and slightly glossy. The production and style presaged the second coming of Emo in my estimation, at least as Hardcore picked up the genre after dropping it with the dissolution of Embrace and Rites of Spring and the D.C. bands of that era. I can and sometime will make a strong argument that Emo as it came to the popular consciousness a couple years ago sprung from the genre's rescuscitation at the hands of the (at the time) 17-year-old Jeremy Enigk, who captained the once-astounding Sunny Day Real Estate. But none of this is the point. The point is that this week, some 12 years after the original Orange 9MM EP was released, I finally got the joke of the title of the band's first full-length, which I bought but eventually sold off. See, the band's first long-player is titled "Driver Not Included." I don't believe that I ever put that together with the fact that the first cut on the EP is called "Driver," which, in fact, was not included (disappointingly so) on the first full length. The full-length did include a new version of "Cutting and Draining," incidentally. So yeah, in the mid '90s I thought I was really smart, but I guess I was probably kinda dumb.

It's nothing new for lyrics in hardcore songs to deal with the state of "the scene," but I hear distinctly now in "Driver" Chaka facing the wall that hardcore was hitting at the time. In the early/mid '90s hardcore kids as a group started to have a fancy uniform: for a time anyway it was the earrings that put a big hole in your ear lobes, army shorts, and a preppy-ish polo shirt. The hair grew out. The boots came off. The tattoos multiplied. The new template, musicwise, was best exemplified by Texas Is The Reason. The focus of Hardcore, from my sort of outsider perspective, changed from the music to the scene itself. Maybe there are 16 yr old kids out there now who still do it the way it was done back in 1990. But for people around my age, for whatever reason things changed, people walked away. I am no expert on this, I was never really in "the scene," I was just really excited about it and was excited to make and have friends who were in it.

Anyway, here is Orange 9MM's "Driver." Crank it up.

Tiny Mix Tapes likes Montrealer Harris Newman's new record. You can read about it here. I met Harris once while minding my own business up in Montreal there with Zozman and Rob V. A nice fellow.

The Monkey has a great little segment up, sort of in the same vein as the work done over at Mystical Beast, that connects the dots between Tom Waits, Captain Beefheart and Howlin' Wolf. Dig it.

KoomDoog points us to a pretty great article about guitar hero Nels Cline.

MLE, admitted to practice in the great commonwealth of Pennsylvania, points us to All Music Guide's entertaining evisceration of the latest Bright Eyes releases. Enjoy.

Here's the latest on the animal shelter where the Breitling family got its best dog. This place needs to fire everyone and start all over again. They are sitting on $7 million but only pay for $80 worth of veterinary care each week. If I was put in charge of this, some people's balls would be cut off, pronto. 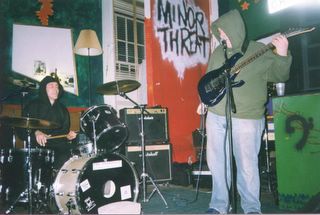 "Hopeless, that this will turn out better." - The Wrens.

This is why the Internet rules. Here is an indie list dispatch from the early 90s that recounts at least one of the great indie shows that took place at My Pal God Records impresario Jon Solomon's house in Princeton, NJ. Further down the post describes the recording sessions for Small Factory's excellent 'I Do Not Love You," including the interesting info that the basic tracks were recorded by a guy from The Dambuilders. The post also mentions a self-released 25-minute long Small Factory video that I would kill to see. I don't even know how I would go about looking for it now, 12 years on. Anyway, these archived Indie List posts are an invaluable oral history of '90s indie rock, in my opinion.

Some fascinating posts at Spoilt Victorian Child lately. I had no idea Malcolm McLaren also had linkage to the burgeoning American rap scene of 25 years ago. Here is the SVC post.

Watch this space for updates on when my Radio TeapotHill broadcasts will resume.