"I sit around and think about it all the time." - Flop.

This is likely my last post of the year, so in order to be just like everybody else, I'd like to share my favorite 10 releases of 2004 (as already submitted to Junkmedia, who have their own very attractive omnibus Best of 2004 list here, and Crazy Earley, who is also collecting lists for some reason). While my list is numbered, the numbers don't really mean anything. I subscribe to the same attitudes and opinions on comparing apples and oranges as John Darnielle does on this very good Last Plane To Jakarta post. Without further ado, my list:

From the "It's an awesome record but event I think that price is too high" files: someone is hocking a CD version of the stellar Acetone "I Guess I Would" EP on Ebay for $30. I've got this on vinyl -- it was a promo from my WESU days. The B-side is a MONSTER jam on some Kris Kristofferson song which is somewhat akin to Mogwai reworking CCR's take on "I Heard It Through The Grapevine." Anyway, if you can find this for $9.99 or less, you will really enjoy the record. I am still holding out for a copy of "If You Only Knew" to replace my cassette dub of it. Found it for $1 last week, but then the dumbass wanted to charge me $3.50 in shipping. That's just gouging.

Another from the ridiculously priced CD file. Some jackass wants $80 for the posthumous Archers of Loaf live record. Duh.

To co-opt an anti-tobacco slogan, where is the outrage? The torture of prisoners at Gitmo detailed in this report by the NYT makes my stomach turn. Everything right is wrong again. Or something.

Finally, here is the playlist from my radio show this prior Tuesday. Another good night, two whole listeners, including the mysterious listener with the IP address that suggests they are from Malibu, CA. Rest assured I'll be back with more rock in 2005.

That is all. Happy Ramadan, Hannukah, Christmas, Kwanzaa and New Year.

NYT has a nice happy profile of a Philadelphia band I knew nothing about until now. I just like the optimistic smily-ness of the profile.

Scenestars does a fair enough job summing up The Stones Roses, or at least where things went wrong for them. I've been thinking about re-assessing "Second Coming," and the two tracks posted here will give me the chance.

The coolest thing I've heard all week is Brendan Canty of Fugazi fame is doing a DVD series where he goes to a city and films the bands touring through the city or residing in that city playing music in front of a structure that is about to be destroyed. Crazy, but true. Billboard has the skinny.

Okay, here is the playlist from last night's webcast. A hot show in my opinion. At least, I enjoyed listening to it. There will be one more show this year, 12/21 at 9PM. Then I'll be back on the InterWeb the first Tuesday after New Year's, which I beleive is the 4th.

"Give me my time, and let me be outside." - Jane's Addiction.

Tune in to Radio TeapotHill tomorrow night for my penultimate 2004 webcast. It will rock. 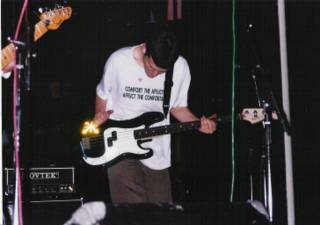 Email ThisBlogThis!Share to TwitterShare to FacebookShare to Pinterest
"Kind of hoped you wouldn't blame me, I can't wake up." - Lemonheads

Eagle-eyed (and admitted to practice in PA) reader MLE points us to a pretty great acoustic performance by Evan Dando (backed up ably and probably necessarily by Come/The New Year's/Consonant's Chris Brokaw) in Australia that you can stream here. The first six numbers are "Drug Buddy," "Paid to Smile," "All My Life," "The Turnpike Down," "$1000 Wedding" and "Great Big No." All in all Dando performs pretty well -- his voice exhibits signs of the hard living that Dando has gained notoriety for, certainly, but he is not as fat and grubby here as I have read he has been in the last couple years. Anyway, if you have a chunk of time to spend with it, it is time fairly well spent.

Chromewaves drops knowledge regarding the oft overlooked UK guitar band The House of Love, whose work that I've heard I've liked very much. Chromewaves makes the point that the band filled that gap in time between the end of the Smiths and the rise of the Stone Roses, though I remember them overlapping the Stone Roses or even coming a little bit after. Their career arc, at least in my mind, followed closely that of the also oft overlooked Sundays. Anyway, check it out (the posting also has a direct link to that Stars video I was raving about a couple weeks ago).

Parasol's favorite records of 2004. I don't shop there, but I've seen the Good Doctor blow a week's wages over the phone with them in about eight minutes.

"After last night it's hard to shine." - Rodan.

Some odds, some sods.

The Big Ticket is building a list of its favorite tracks of the year, all of which to day I heartily approve of. Check it out -- song list/links at bottom of post.

Former Pitchforker and current PSFer Chris Ott does a serviceable job in his turn manning the Stypod.


My latest obsession. Another obsession is finding a cheap but relatively pristine copy of the Arthur Prysock record "Soul Soliloquoy" (King), which has this zany song on it called "Where the Soul Trees Grow." There is a sample of the song here.

And then they were gone...

Okeydoke, here is my playlist from last night. I had a short breakdown early on in the set, but since I think we officially clocked zero listeners last night, not really a big deal.

"Never learned to swim, can't grow a beard or even fight." - Lemonheads

Tune in to Radio Teapothill tomorrow for my weekly webcast program at 9PM EDT. And now, the news:

Congratulations to The Mobius Band, a longtime Clicky Clicky fav, who have apparently signed to Ghostly International, home to excellent electronic acts including Lawrence, Matthew Dear and Solvent. An EP is in the chutes for this winter, and the band is writing for a full-length to follow. Kudos.

There is a really bad video for the Lemonheads' "Mallo Cup" here, among others. I was trying to find their video for "Luka," sort of to illustrate that every professional advance the band ever made was on the strength of a great cover song. Which sounds like a slag, but I actually really, really like the band a lot. Oh well. Angelina Jolie appears in the video for "It's About Time." Juliana Hatfield does not. The video mix for "The Outdoor Type" is jazzed up with harmonies and solos that don't appear on the album cut.

This is interesting -- posted by Vinyl Journey.

An interesting NYT bit (with obligatory Mike Dreese quote) about different editions of albums hitting the marketplace at the same time.

"Did you forget me, too, with all the people that I knew?" - Ted Pauly.

The very uneven Indie Workshop web site reports that the fellow from Christie Front Drive and Antarctica has signed his latest project, the 101 (a nod to the pre-Clash act, I wonder?) to a Philly label and will release a record in February. I tired of Antarctica after a while, but CFD's split with Boys Life is still one of the top 10" records ever released. Incidentally, with the rehabilitation of my Webcor Musicale record player, I revisited Small 23's "Free T-Shirts for Spain" 10" recording Sunday night. That is a hot goddamned record. Certainly the best thing Small 23 did. Anyway, here is the link to the info about The 101 [see the news section, upper right].

Readers will be familiar with my fascination with and disdain for Wal-Mart. There was a recent program on the public television about the retail giant putting the squeeze on U.S. suppliers (in this instance, TV makers) to outsource to China to meet Wal-Mart's demands for cheaper product to make bigger margins. Anyway, here is evidence the retailer role has really become dominant in the supply chain: This article notes how Kraft, the largest food products company in the world, is forced to tighten its operations in order to satisfy the big box stores. The most troubling aspect of this to me is the portion of the story that notes that product diversity is being purposely stifled. But enough of that.

This is a really cool article about someone finding the lost first recording session of the Velvet Underground. Check it out.

Bob Mould buys a new car. This is not interesting, but for some reason it interested me anyway.


Okeydokey, here is the playlist from Tuesday night. Sorry about the breakdown midway through the set -- server logs show I lost a couple listeners there, but picked up others in the 10 o' clock hour. Anyway, thanks for tuning in.