Notes From The Underground: Aüva's Day Two in The Studio at Mad Oak with Benny Grotto 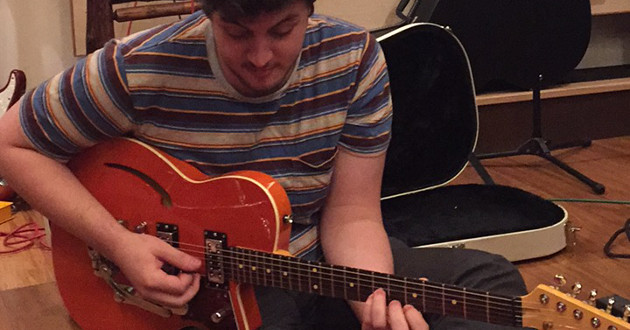 Here we are with the day two reportage from Boston indie pop sextet Aüva's foray into Mad Oak Studio. The band was there Friday, Saturday and Sunday this past weekend with producer extraordinaire Benny Grotto on the dime of an anonymous donor and friend of Clicky Clicky, and the plan is to track and mix three new songs. Yesterday we posted singer and keyboardist Miette Hope's impressions of the first day, but tangentially we'll note that Aüva's Friday didn't stop when that session was over. The band played a show at Make Out Point Friday, Clicky Clicky operatives were there, and we're told Aüva played one new song, and a bunch from this year's LP including "Better" (whose video was also shot in part at the Point) and closing the set with the dreamy pop gem "Into Place." Mixing on the three new tunes is slated to transpire later this month. For now, check out drummer Michael Piccoli's thoughts on the second day of the sessions.

Day 2 in the studio was devoted to tracking guitar, keys and bass. We arrived at noon and started out by listening to all the drum takes from day one with fresh ears before recording other instruments. We were all glad to hear that the drum takes were solid so we were ready to move on. Andy did a great job nailing down the bass parts, and it only took about an hour for him to play all three songs. Benny had different ideas for each song and sent the bass through different combinations of amplifiers and compressors depending on what he thought the song needed. After recording bass we moved onto rhythm guitar which we used a similar approach for. Benny had a few different Reverend guitars in the studio that he let us play on the different songs in order to achieve the best sound for each tune. He also had some ideas for what Jake was playing and we got to use one of his 12-strings to double one of the lead lines and it gave the sound a very vintage mid-'60s sound, reminiscent of The Byrds, which we were all excited about. Moving onto keys, we used our Yamaha MX49 keyboard and created sounds by blending two different instruments and adjusting the sound envelope. We also tracked acoustic piano on a couple of the songs and used two mics behind the piano and one room mic. Overall it was a great day in the studio and tomorrow we plan to move onto vocals, lead guitar, and percussion. -- Michael

Related coverage:
Notes From The Underground: Aüva's Day One in The Studio at Mad Oak with Benny Grotto
Hey This Weird Thing Happened Where Someone Gave Us Studio Time To Give Away So We Gave It To Aüva And Let's See What Happens, Shall We?
Footage: Aüva's Swaying Surf-Pop Gem "Better"
Together Again: Clicky Clicky Presents Two Nights of Adventurous Electronics And Under-Pop May 18+19

Email ThisBlogThis!Share to TwitterShare to FacebookShare to Pinterest
Labels: Aüva, The Byrds

Notes From The Underground: Aüva's Day One in The Studio at Mad Oak with Benny Grotto 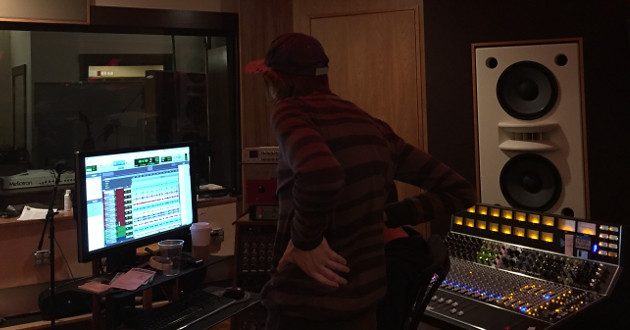 Aloha readers. If you caught our post a few weeks back about sending Aüva into the studio in a mystery donor's dime, and even if you didn't, well it's time for an update. The young and talented Boston indie pop sextet entered the hallowed halls of Mad Oak Studios with esteemed producer Benny Grotto Friday to record new music, and we've got a report from singer and keyboard player Miette. It turns out the band and the studio are neighbors, so Aüva was able to literally just push its gear down the street to make the session, which seems like something The Monkees would have done, so we like it. Anyway, we'll have additional notes from the band in the coming days. For now, read Miette's take on day one.

Our first day in the studio, we pushed all of our gear over in a shopping cart from our house which is actually right down the road. Making our way to the studio we were surprised at how well it was disguised in what looked like a garage from the front right around the corner from the tattoo shop and venues we have all been to before. When we met Benny he was super nice and made us feel very comfortable right off the bat. His conversation was casual but professional and we didn't waste any time in getting right down to business discussing our instrumentation and process. The studio itself was amazing, with gorgeously warm toned wood floors and panels surrounding. The monitors and mixing board were super nice and there were so many different compressors and preamp options throughout the mixing room.

We all took a seat on a black leather couch at the back of the room that was placed perfectly in front of the monitors and talked about our recording plans for the day. After some conversation we collectively decided that it would be best to play through all three of our songs live and focus on getting the best drum takes. We sang the vocals in the mixing room in front of the window in between the live room and mixing room so we could see the rest of the band and they could see us. Benny is also a drummer so he had some cool suggestions for Michael in order to get the best possible drum sound. We played one of the songs without a click to really get the feeling of the way we are used to playing it and it ended up going really well. Another really cool thing about this studio is that the lights in the mixing room had color changing capabilities so we were able to have the room be whatever color we wanted which really helped us get into the feeling of the music a little more. Overall, the first day was very productive and we had such a good time working with Benny and in that space. Can't wait for tomorrow [Saturday -- Ed.], we'll be tracking bass, guitar, and keys. -- Miette

Related coverage:
Hey This Weird Thing Happened Where Someone Gave Us Studio Time To Give Away So We Gave It To Aüva And Let's See What Happens, Shall We?
Footage: Aüva's Swaying Surf-Pop Gem "Better"
Together Again: Clicky Clicky Presents Two Nights of Adventurous Electronics And Under-Pop May 18+19