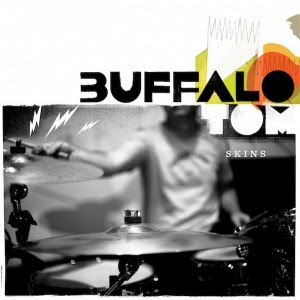 Thankfully, we haven't had to wait as long for Skins (out tomorrow on the band's own imprint, Scrawny Records) as we did for Three Easy Pieces, the album Buffalo Tom returned with in 2007 after a nine-year semi-hiatus. Better still, the new set is a stronger album. Where Three Easy Pieces felt sort of self-conscious in trying to figure out what the band means in the new century, Skins finds the band on more confident footing.

Its sound is layered and textured, with pianos and acoustic guitars and mandolins alongside some big SG/Marshall power chords. It breathes. That much of it was recorded with Paul Q. Kolderie at Camp Street Studios, with whom and where the band last worked with on its watershed 1992 album, Let Me Come Over (Camp Street being in what used to be the legendary Fort Apache studios) is probably no coincidence.

It's real, just as Buffalo Tom always have been. They've always been a band that's wears its heart on its sleeve, but in ways we can all relate to and with a sound to match. It's as if the Stones, Van Morrison, and The Who weren't Ivory Tower rock stars, but rather guys that grew up on your block or that you went to school with.

Skins' foundation lies in tracks 3-5. I don't think I'm out of line suggesting that guitarist Bill Janovitz has a trademark chord progression style out of which he's somehow managed, with subtle variances, to wrangle a couple of the band's biggest songs, "Taillights Fade" and "I'm Allowed." Here, it yields "Down" and its infectious titular refrain, and it feels as timeless a Buffalo Tom track as this all suggests. "Don't Forget Me" doesn't even need its lyrics to make you run your whole life through your mind and Tanya Donnelly's harmonies seal the deal; its follow-up "Guilty Girls" should be the feel-good rocker hit of the summer.

Skins all comes down to the album's central broken heart, "The Big Light," Janovitz's dedication to his beloved uncle (he related the devastating story on his blog in 2009). It's a soaring rush of a racing mind trying to process a tragedy. Two-chord songs have rarely been more powerful.

The album's solo demos -- included on a deluxe edition -- are a must. There's not necessarily many major revelations of lost verses and nixed middle eights -- their arrangements are more or less the same. But the spare sound gives the songs even more heft. They sound like they were recorded after a long night of pouring hearts into song. Those pure moments of creation. Special mention to Colbourn's demo of "The Hawks & The Sparrows," which is a charming mix of his cracking, ill-sounding voice over a background of playing children.

Buffalo Tom has always meant autumn and back-to-school and flannel and melancholy reminiscence and the mental steeling for a bleak New England winter. Skins is not so different, but the end-of-winter release puts it in a different perspective. It breathes with that cool breeze from the first pre-Spring open window. It's still a bit dark and dreary outside, but we're turning that calendar page.

They're on tour in Europe right now, but return for a hometown gig at the Paradise on April 8th and play 2 for New Hampshire Public Radio in Portsmouth just before that on April 2nd. More US dates follow.

Well written review of a great album. Thanks for writing it!