How The Radishes Get Their Cleaning Done: With Rock 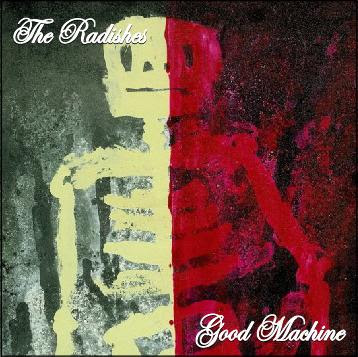 The Radishes. They've seen the end of the world and they're not impressed. They also nestled an awesome, hip-shaking fist-banger deep into their recently self-released record Good Machine. Observant readers will recall that Boston trio Pending Disappointment also tried to hide a great song from us by putting it near the end of their record, which we wrote about below. But you guys can't hide the rock from us. Time for some Wikipedia-stylee disambiguation: The Radishes are not Radish, Ben Kweller's '90s grunge vehicle, but rather an amped-up, garagey quartet whose primary songwriter has an eye-catching last name for indie rock fans (although we expect there is no relation between The Radishes' Paul Stinson and The Replacements' Stinson brothers). Those in search of some pedigree in the band need look no further than bassist Paul Barker, whose name astute fans will know from Mr. Barker's work with Ministry and Revolting Cocks. Barker doesn't play on Good Machine, but he and former Ministry/Scratch Acid/Rapeman drummer Rey Washam apparently play on a forthcoming EP.

Since we're name-dropping some bygone acts we might as well insert here that The Radishes were the first band to play the legendary San Francisco hardcore venue Mabuhay Gardens when it re-opened in September. But let's focus. We're here to tell you about "Hook Me Up," which blasts out of the gate with straight snare banging and tons of swagger. The magic of this song is that it's stripped to the bare essentials and paced for a the dramatic conclusion of a hipster dance-a-thon. The band was cool enough to allow us to offer the track as an MP3. Download "Hook Me Up" now so you can crank it when you crack those first beers tomorrow night. You'll thank us later. The Radishes released Good Machine Oct. 16.