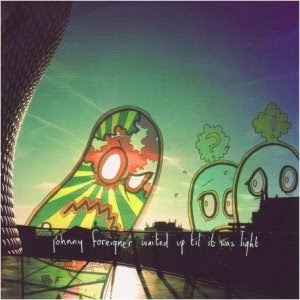 [UPDATED] So it appears the single for Johnny Foreigner's "Salt, Peppa and Spinderella" has leaked to the Internerds. Or at least we found the eagerly anticipated Bloc Party remix posted here this morning. The track, produced by angular-haired guitarist Russell Lissak, is pretty laid-back and abstract. We had presumed the "SP+S" remixes would be cataclysmic club bangers. And we think we might have preferred that. If we were able to assign the remix job out ourselves we think we would have chosen Nine Inch Nails' Trent Reznor, circa the "Sin" CD5. Or maybe one of those doods in Lords Of Acid. We guess we're showing our age. Oh well -- none of this is the reason we're posting this morning. But while we're talking about it, the "Salt, Peppa and Spinderella" single will be issued on 10" vinyl by Best Before Records in the UK on Sept. 8.

Now to the business at hand. We're lucky enough to have one extra copy -- still in the shrinkwrap -- of the British version of Johnny Foreigner's seriously awesome Waited Up Til It Was Light. We reviewed the record here, and we've got a very strong suspicion it will be our favorite record of 2008, or at least top three. The Birmingham, England-based trio's set was released in the UK in early June, but the domestic version won't be in stores in North America until October (although, according to Wikipedia, the actual date is now Sept. 23). Sure, the album has been available digitally at all the usual digital storefronts for a few weeks. But the tangible artifact is well-worth seeking out (which is why we paid a ridiculous amount for the import) for many reasons, not the least being that it comes with seven different album covers featuring artwork by Johnny Foreigner compadre Lewes Herriot.

Now, normally here at Clicky Clicky we simply just give things away, figuring no one wants to deal with the hassle of filling out a form, or doing a little research, or whathaveyou. That said, we're going to make the winner work for this one a bit. Don't worry, it's nothing hard. The way to win your very own pristine copy of the UK version of Waited Up Til It Was Light is by being the first person to send us an email that contains the names of any three songs released on a single by Johnny Foreigner through the Laundrette Recording Company label. The first person (U.S. residents only, sorry) to email us that information (our email is linked in the sidebar) gets Waited Up Til It Is Light for free. Since you read this far, we'll give you a hint: one of the titles at Wikipedia is incorrect. We'll update this item when there is a winner. Good luck. And just because we can't help ourselves, here is one of our favorite unreleased Johnny Foreigner tracks, which if memory serves was even left off of the I Like You Mostly Late At Never demo. [UPDATE: Congrats to reader Jane, who won the record]