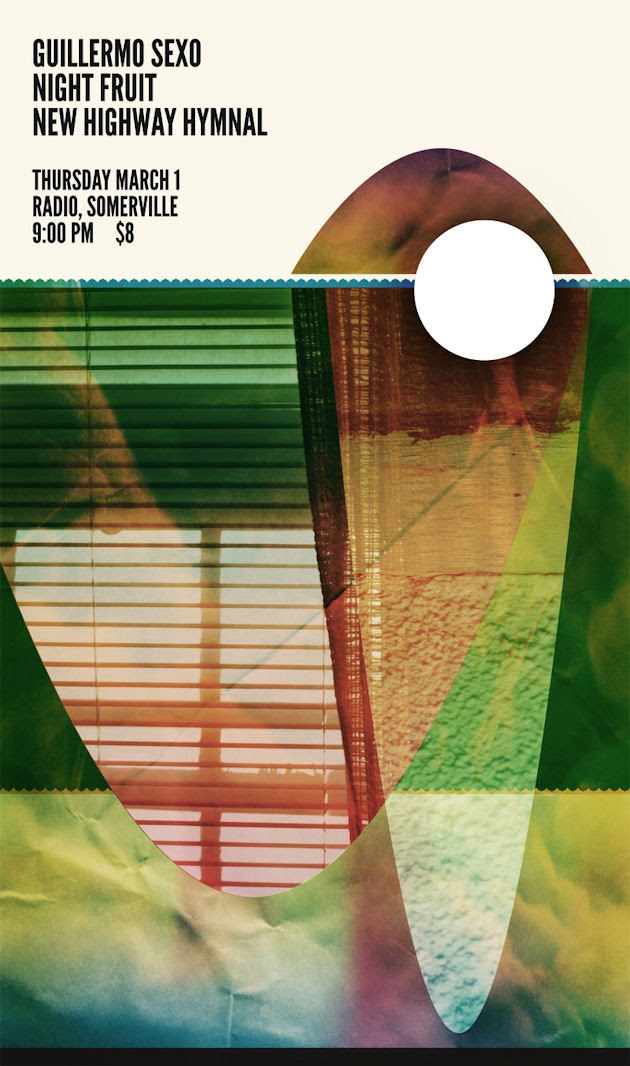 After reaping substantial acclaim for its entrancing 2011 collection Secret Wild [review here], Guillermo Sexo hasn't been standing idly by counting red cars or pulling hair out of its collective hair brushes or obsessively rearranging the juice glasses in its cabinet. Actually, we can't confirm they haven't been doing these things. But what we can tell you is Guillermo Sexo -- possibly in addition to all of the above -- has been turning heads with a steady stream of area live shows. Your next chance to see the quartet is thankfully close at hand, as Guillermo Sexo top-lines a very formidable bill this coming Thursday at Radio in Somerville. Also on the bill is dream pop concern Night Fruit, which in December wowed us with its brilliant single "Dark Horse." Night Fruit apparently has another single in the works and is prepping for an April tour of the upper midwest, so it's not unlikely that you could hear the band trying some new things Thursday. Also taking the stage are local psych rock superlatives The New Highway Hymnal, who are riding high from the release of their Vanya Records single "Blackened Hands," which was feted with a hat trick of record release shows earlier this month. The single -- a dark, bluesy shouter and slide-guitar workout -- was issued on clear vinyl in a limited edition of 300 for sale right here.

To freshen your drink before the show Guillermo Sexo is offering the mesmerizing Secret Wild album track "Skyline" as a digital single, which you can stream or download via the embed below. The song is placid when it commences but steadily builds tension until the pressure is so great the feedback at the end threatens to burst the song like a hurled water balloon. We think you'll like it, so snatch it below and then save up some beer money for Thursday.