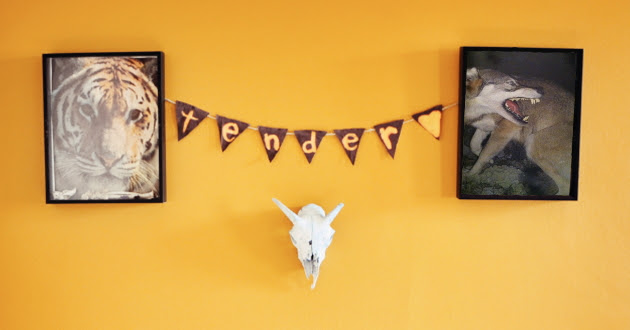 >> Veteran Philly-based indie pop concern Dangerous Ponies are knee-deep in the hoopla of a massive, six-week spring tour to promote its latest release, the EP Tenderheart. The four-song collection, produced and co-engineered by ex-Algernon Cadwallader guitarist Joe Reinhart, includes the title track as well as the tunes "Sparks," "California" and "Dogfite," and it was released digitally March 8. Tenderheart will be released on 7" vinyl March 27, just days before the collective founded and fronted by Chrissy Tashjian blows into Boston for what will surely be a barn-burner of a show at some place called Discovery Zone with white-hot Boston aggro-twee trio Earthquake Party!. Incidentally, Ms. Tashjian is abetted by a half-dozen "friends, family and lovers" (Facebook's words, not ours, LOL) including the five-different-band-having, wholly righteous dude Evan Bernard on guitar and vocals. The EP boasts invigorating pop numbers notable as much for their punk energy as they are for the creative arrangements, vocal harmonies (particularly those sunshiney ahhhhhhs on "Sparks," and the layered interplay in the brilliant chorus of "California.") and pro performances that elevate Dangerous Ponies' music far above the realm of anything one might refer to as "pop-punk." The admixture is significantly enhanced by the depth provided by Reinhart, et al.'s imaginative production, but goddamn if plain writing awesome songs doesn't help a whole lot, too (srsly, have you seen this? / spot the Ampere T). Tenderheart, as we noted supra, is already available digitally now and pre-orders for the vinyl issue (as well as orders for the digital) are being taken through the Dangerous Ponies Bandcamp yert right here. Stream the entirety of the delightful EP via the embed below. Complete spring tour dates can be inspected right here. Dangerous Ponies released a self-titled debut full-length in Jan. 2011, and the Dr. Ponie Medicine Ponie EP in 2009, both of which are also available via Bandcamp.

>> Earlier this evening Birmingham, England-based noise-pop heroes Johnny Foreigner finally revealed the full skinny vis a vis its recently promised mini-album. The self-recorded and self-produced short set is titled Manhattan Projects, and 22 very lucky fans snapped up in minutes the physical version of same, much to our chagrin (you turn your back from the Internet for ONE MINUTE to feed your kid...). That tangible manifestation of Manhattan Projects packages "4 unique 8" x 6" photos from our November trip to America and Canada, with hand drawn bastardiasations and special effects by Lewes" (guitarist Lewes Herriot) along with a download of six songs. Fortunately for the rest of us, the music is also available sans the photo set. As we reported earlier this month, the half-dozen songs are re-worked version of older tunes with tweaked names alongside some new tunes. So the Johnny Foreigner vs. Everything highlight "(Don't) Show Us Your Fangs" becomes "(Don't) Throw Us Your Slang;" the recent EP standout track "3hearts" becomes "Free Starts" (a version that includes a performance from the inimitable Jack Pop of Alcopop! Records himself); and the 2008 single "Eyes Wide Terrified" becomes "Ice Slide Terrordive;" etc. Manhattan Projects, so named for a comic book that as best we can tell has the same premise as one of our many favorite Michael Paré films, is clotted with gems, but definitely hang around until the end for the stirring, even-quieter-than-the-rest closer "Riff Clitchard (Cursed Version)." The tune commences with a hypnotic guitar arpeggio and a subdued vocal from bassist Kelly Southern and then breaks down like a crumbling, old-world automaton -- it reminds us of the crushing final number, "Yr Loved," from the brilliant 2010 EP You Thought You Saw A Shooting Star But Yr Eyes Were Blurred With Tears And That Lighthouse Can Be Pretty Deceiving With The Sky So Clear And Sea So Calm. Listen to the entirety of the new collection via the Bandcamp embed below, and click through to purchase, which we highly recommend you do. Johnny Foreigner has promised two more releases this year, and Manhattan Projects has us even more excited for them than you would normally expect out of us, rabid love for Johnny Foreigner and all.

>> After selling out of its debut release almost entirely on pre-orders earlier this year, fledgling London-based experimental music label Glass Reservoir returns next month with a full-length from Zurich-based electronic music producer Fiocz. The 10-song collection, titled Social Cognition, will be issued under the catalog number TGGR002 in a limited edition of 50 CDs and as a digital download. Fiocz, according to Glass Reservoir, "is an innovative experimental analogue modular synth composer who builds intricate compositions one patchcord at a time." As we alluded to supra, Glass Reservoir's initial release, Benjamin Shaw's spooky, buzzing Summer In The Box Room, sold out quickly. With certain of its compositions (particularly "Dysphoria") touting almost conventional rhythms, Social Cognition is perhaps even more accessible, so we expect it will be snapped up by fans of thoughtful abstract music in a similarly expedient fashion. Indeed, Fiocz's tracks convey their own odd sense of groove that frames patient, shaded ambient drones that are sourced in part from field recordings of Fiocz's work, home and "surrounding environments." The result recalls elements of the work of electronic producers a decade ago, such as the more subdued productions of bigs such as Squarepusher (we're thinking "My Fucking Sound") or even not-so-bigs such as Lawrence ("Titel 4"). Social Cognition will be released April 29. Stream via the embed below the album track "Subtyping," a pensive mecha-groover which clicks and stammers and hums with much solemnity. Pre-orders for Social Cognition will be taken beginning March 29, and it is our advice that if you want this thing you pre-order early and often.