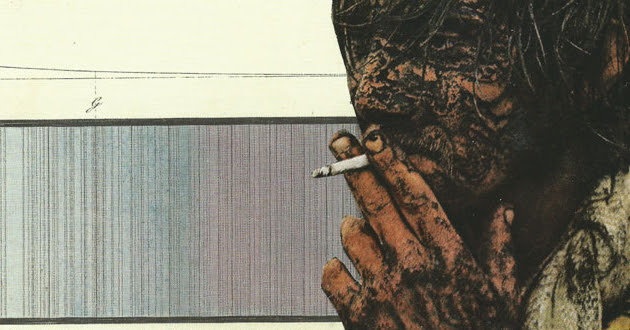 >> We haven't gone through our archives to see how often we've said it, or how consistently, but we've got a standard rap about odds 'n' sods collections. At best, such a collection gathers together relatively inconvenient-to-gather stuff. In the best-case scenario -- and this is certainly dependent on the band -- the stuff evidences exciting chance-taking that presents a broader set of possibilities, or even a broader stylistic scope, than what ends up on a "proper" album by the act in question. [DELETED LONG ASIDE ABOUT PINK FLOYD]. But we're not talking about Floyd today, we are talking about Boston treasure Hallelujah The Hills. Its terrific Portrait Of The Artist As A Young Trash Can, released Tuesday, is an exciting collection of non-album singles, coulda-shouldas and curiosities (the most curious of these is an unsolicited dance remix Hallelujah The Hills received of "Wave Backwards To Massachusetts"). The 21-song set also contains three new songs, including "Confessions Of An Ex-Ghost," which recalls a similarly excellent pop classic from Love As Laughter. It speaks to the overall quality of Hallelujah The Hills' work that its loose ends don't sound like session seconds compared to the new tracks and singles. Hallelujah The Hills' not-so-secret weapon is the facility with which fronter Ryan Walsh's voice conveys myriad emotional dimensions. Compound that with the fact that he's a brilliant lyricist -- clever, self-effacing, often dead-on with a Malkmus-ian deadpan -- and a cracking coterie of collaborators and it's easy to see why there's gold at every turn here, from the spitting vitriol of the overdriven live version of the stomping shouter "(You Better Hope You) Die Before Me" to the breezy and whip-smart strummer "Honey, Don't It All Seem So Phony." Hallelujah The Hills played its last show for the foreseeable future last Friday at the Sinclair in Cambridge, MA, and now intends to turn its attention to writing and recording a new album. The act's most recent long-player was 2012's No One Knows What Will Happen Next. We think you can stream all of Portrait Of The Artist As A Young Trash Can via the Bandcamp embed below, which you should do, as it will make you whole.

>> A couple years ago we were just finishing up a long stint of travel for the day job, which required of us a lot of airplane trips to the center of the good ol' U.S. of A. and back again. We were pretty well exhausted by all of this -- not the travel, but the work -- and one of the rare pleasures of it all was sitting down on the airplane, closing our eyes, and listening to Broken Shoulder's tremendous debut long-player Broken Shoulderrr. The set, still available for purchase via Audio Antihero right here, is a trance-facilitating pastiche of melody and noise, pretty and engaging and just challenging enough but not so much so that one can't listen to it while resting. On an airplane. Over the last couple years the music of now Tokyo-based Broken Shoulder has varied stylistically somewhat on succeeding releases, embracing at times more chaos than melody. We are pleased to hear something of a return to the sound of that debut collection on the band's latest, Title Track. The highlight of the collection is the closing number "What Is Thirteen?," which arranges field recording, droning guitar arpeggiation and other sonic elements into a gently churning aural roux that seems to spread in every direction all at once before receding into an insectoid buzz and urban crowd noise. Title Track is available for purchase as a digital download and CDR via Broken Shoulder's Bandcamp right here, and we've embedded the entire set for streaming below. The CDR's are packaged in a handmade paper sleeve with fancy stickers, if that's the sort of thing you like. The collection was recorded in January 2013 at mastermind Neil Debnam's home in Japan and mastered by the great Benjamin Shaw (who, incidentally, just played what he claims will be his final live gig in London). Stream Title Track via the embed below; whether you purchase a plane ticket as well, well, we'll leave that up to you.

>> This publication regularly decries the glut of contemporary guitar bands that have "discovered" reverb and find the genre tag "surf" a convenient descriptor for weak material, but that doesn't mean we don't ever find a band we like making surfy sounds. Take for example Israel-based guitar-pop unit Soda Fabric, a quartet that recently released a third digital single from its planned EP titled Tears On The Beach. The tune is called "She Hides Her Soul," and in its first moments its splashy electric snare and clean guitars come across as a little too benign. But the song steadily gathers intensity and bursts with a delightfully unhinged mania at each chorus: fronter Moosh Fabric's vocals decompose into throaty shouts, Shachak Fabric pelts the crash cymbals until the din resembles a sheer, but palpable, curtain of white noise. "She Hides Her Soul" was released to the wilds of the Internet April 25, and you can download it from Bandcamp right here, or stream it via the embed below. There is also a kitschy video for "She Hides Her Soul" that features a girl dancing in animal-print underwear and chewing gum at the same time; if that is your thing, you can watch it right here. There is no release date at present for Tears On The Beach, but the art is on display right here along with a pledge that it is "coming out soon," in a limited edition. Soda Fabric is plotting a tour of Germany, according to this post.