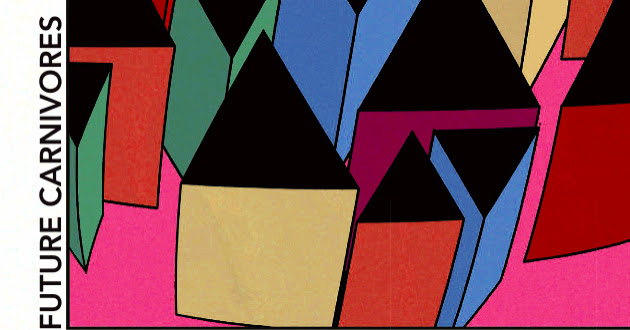 >> A number of things conspired against us providing timely coverage of Future Carnivores' recently issued sophomore set, but none are as remotely interesting as the record itself. Titled Come Inside, the set features 10 generous cuts of the Cambridge, Mass.-based collective's singular tribal space-pop. The songs are largely spun from the same silk as the tunes gracing Future Carnivores' 2012 self-titled debut, which we reviewed here. Come Inside continues the band's love affair with re-imagined New Romantic pop: dreamy vocals swirl over basic, hypnotic grooves fashioned from electro beats and staccato guitar loops, a foundation regularly and significantly embellished by imaginative instrumentation and production. If there is a defining characteristic to Come Inside versus the band's debut, it is that the music has drifted further from verse/chorus constructs to focus pointedly on the aforementioned hypnotic grooves. If you'll permit the aside, it calls to mind Dave Sitek's (TVOTR) interview with Pitchfork in 2006, in which he discusses the importance of repetition ("Through the trauma of birth we're thrown into these repetitions, everything from our heartbeat to our routines, and I think it's identifiable") and hi-hat ("This guy named Fegun who played with Fela Kuti for a while was telling me about the hypnotic effect of music. He's like, 'The most important drum in Afrobeat is not a drum, it's the hi-hat. Because it hypnotizes. And that's what people identify with. It syncs with their heartbeat.'"). It speaks to the confidence of Future Carnivores that Come Inside opens with a six-minute mid-tempo jam whose second-half blossoms into a blissful, psychedelic sound-chakra. "Blame Time" ups the ante on the six-piece's groove fixation via a foregrounded syncopated cymbal cadence. Not that there aren't some uptempo and single-worthy numbers on Come Inside; the quasi-title track "Twice" is a modern dance-floor killer that provides the record's boldest moments, and the slightly more subdued preview track "The Drugs She Fed You Last Night" goes intergalactic when the beat drops out and returns at the close of the final chorus. Come Inside was self-released by the band June 3, and is available for sale as a digital download via Bandcamp. Stream the whole dealy via the embed below.

>> We aren't head over heels over the entire collection, but the recent lo-fi LP from Philadelphia's Manors does feature one song we can't stop listening to, the sweet, spare and spooky ballad "Teeth Dreams." Tangentially, we'll remark here for those who don't know that teeth dreams is a thing, we used to have bad dreams with some regularity that our teeth broke. Ironically, we finally broke one 10 years ago and then the dreams went away. Magic! Anyway, Manors is the nom de rock of Dayna Evans, and "Teeth Dreams" rests in the midst of her record called Fit In. The set features drumming by all-around awesome dood Evan Bernard, whose name should be familiar to Clicky Clicky readers, but "Teeth Dreams" is comprised of just three elements: a Kim Deal-esque vocal track, electric guitar and what we'd guess is melodica. It's the simple vocal and its sad, self-aware narrative that draws us in again and again ("...I thought you'd be the one, but I don't know anymore..."). The tune is filled with beauty and resignation and regret and doubt and is terribly human and affecting. It's perfect for the hot summer days upon us, just the thing to help you pass still hours under a piece of shade and within a wisp of breeze. Fit In was released to the wilds of the Internerds via Bandcamp May 14; stream "Teeth Dreams" via the Bandcamp embed below.

>> We'd be derelict in our duties if we did not inform you that details about the new record from reunited alt.country legends Scud Mountain Boys are now available. The new, fourth set -- the band's first in 17 years, since the release of the harrowing classic Massachusetts -- is titled Do You Love The Sun, and it streets July 9 via Ashmont Records. You can look at the album art and stream three songs (the title track, "Double Bed" and "Crown Of Thorns") at the quartet's brand-new web site right here. Fans who pre-order by July 4 will also receive a numbered, limited edition bonus disc titled Drowned, featuring three Joe Pernice-penned tunes recorded just before the Scuds signed to Sub Pop. Legal drama that surrounded the signing, among other things maybe, kept the songs -- which were recorded with Michael Deming at Studio .45 in Hartford, Conn. -- from ever being released previously. Drowned goes out of print immediately after the expiration of the pre-order period, so that's a pretty good inducement, right? You know, besides this awesome band reforming and recording a record for you? Incidentally, we once gave a Warners A&R rep the very bad advice to skip a Scud Mountain Boys show in Northampton, Mass. in 1995 or so, instead directing her to see the goofballs in The Unband. Live and learn... Anyway, if you know what's good for you, you will pre-order Do You Love The Sun directly from Ashmont and the band right here. The Scuds first reunited in 2011 at the Lizard Lounge in Cambridge; the foursome's next local appearance will be at Brighton Music Hall in Boston Sept. 20.
Posted by Unknown at 6/25/2013 11:06:00 PM

So, you call yourself a carnivore? LOVE THIS!!!