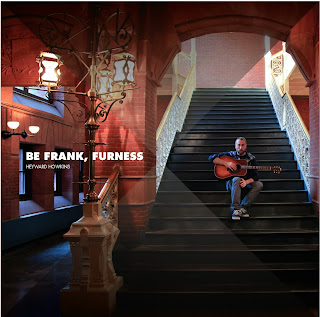 While the year in music from Philadelphia will be best remembered for exceptional indie punk from ex-bandmate twins, the close of 2013 -- the release of Swearin's awesome Surfing Strange notwithstanding -- belongs to two remarkable folk-rock recordings from a different set of former bandmates, the scene veterans John Howkins, who performs under the nom de rock Heyward Howkins, and Joey Sweeney. We hope to deal with the latter's album another day, before the calendar turns over again.

It seems a rare occurrence that the contemporary music fan can sit back and remark with satisfaction at the maturity of a favorite artist or band. Gone are the days where artists had the financial support to work a masterpiece into the middle of their seven-album deal with, well, whoever. But the outmoded label system isn't even the problem. If anything, maturation itself -- and the tendency of the process to dim or extinguish that lightning-in-the-bottle, the je ne sais quoi, the piss, sex and fire of young acts -- tends to fuck up bands in the end. Often artfulness seems to fall by the wayside as songwriters inevitably want to take a shot at communicating more directly and plainly. Maybe certain fans want that from their favorite artists; this reviewer wants none of it, as such a desire seems to diminish or discourage lively abstraction, musical derring-do, vitality, the very rock and/or roll itself. There are exceptions to this, thankfully, and it is with great satisfaction we listen again and again to Heyward Howkins' latest offering, the fanciful and finely appointed sophomore collection Be Frank, Furness.

We're not sure which is more surprising, that the sophomore set from Howkins has come so quickly on the heels of his 2012 collection The Hale & Hearty [review], or that it is so very good. Mr. Howkins heretofore was best known to many as a guitarist in notable turn-of-the-century indie pop outfit The Trouble With Sweeney, which was ably fronted by the aforementioned Mr. Sweeney. But from a musical standpoint, Howkins was all-but-invisible after that combo folded in the mid-oughts. The release of The Hale & Hearty, however, seems to have opened a floodgate of creativity, such that Be Frank, Furness, is an even stronger, more vividly realized collection. On top of which, Howkins routinely posts additional music in the form of demos and oddities to his Soundcloud page. Whatever is fueling the onslaught, we'll take it.

Be Frank, Furness is balanced, pristine, and filled with bright, melodic and deftly composed pop. The productions are lush, with elements including horns and piano arranged around, but not ruled, by Howkins' guitar work. Mannered lyrics evoke images of chronologically remote, fantastical places, and highlight both Howkins' facility as a story-teller and his yen for regional history (the album's title is a play on the name of renowned Victorian Philadelphia architect Frank Furness, and Howkins is a man who traces his ancestry straight back to a signer of The Declaration Of Independence). The lyrics scan like memoirs from The Gilded Age: the last verse of the lush strummer "Sweet Tea Oleander" opens with the line "let's take a rumble seat up to Maine, we'll brush our teeth with champagne." Howkins' lilting voice and precise but occasionally curious diction limn the songs with an other-worldly flavor, even as the rootsy foundations of the songs reinforce a traditional vibration. Tunes like "Nogales" and "Praline Country" bounce with such a lightness they feel like they'll levitate despite their adornment with horns, harmonies, hand percussion and tremelo. Nearly every element -- the tastefully treated, always glistening lead guitars, the horns, the melodica -- convey a lyrical quality, supplying counter-melody and texture in ways that present almost as strongly as (but without overwhelming) Mr. Howkins' limber voice.

Howkins co-released Be Frank, Furness with BITBY last month; he plays a full-band release show in Philadelphia Thursday at Johnny Brenda's. Supporting acts include Needle Points, Christina Nietzsches. Be Frank, Furness is available as a digital download and in a very limited edition of 200 LPs, both of which can be acquired via Howkins' Bandcamp, which can be accessed by clicking through the stream of the album embedded below.