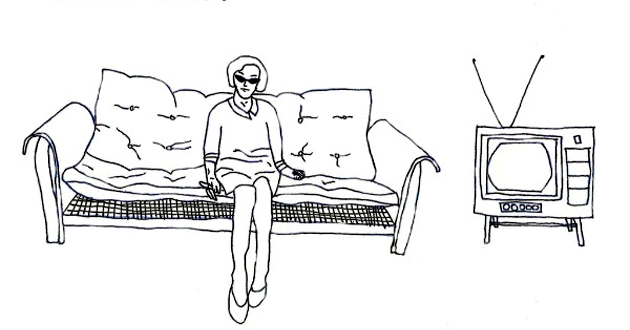 >> We suppose there might be some quibbling, especially as how one defines "big" or "Boston" has some bearing on the matter, but it seems indisputable anyway that the first big Boston album of 2016 comes courtesy of Halfsour. The trio's terrific debut long-player Tuesday Night Live, which streets next week, boasts scads of brisk tunes fizzing with hooks. The first preview track "Porch Sittin" presented a hardscrabble garage sound a la Parquet Courts, but the great strength of the set is its variety of approaches to power-pop (emphasized by the traded-off lead or doubled-up vocals from Zoe and Matt). An outsized melody, caffeinated strumming and explosively boxy snare conspire to make set highlight "Pop Art Pop Tart" a breathless banger. The song careens from verse to pre-chorus to chorus, marrying scritchy guitar chords to just enough jangle to conjure thoughts of Peter Buck. The swinging hip-shaker "Pleasantly Whelmed" also shines brightly, and hints perhaps at Halfsour's purported small-g genesis as a Guided By Voices cover band. The verse of the slow-burning, syncopated "I.K." recycles the classic Beatles "Ticket To Ride" riff, and bursts its seams coming out of a manic chorus with an angular guitar solo that buzzes like a fridge. There's just a lot to like. Tuesday Night Live will be released in a limited edition of 300 LPs and (virtually) unlimited CDs by Jigsaw Records Jan. 29; pre-order the set right here. In addition, Baltimore-based Nebraskan Coast is doing a run of cassettes for Tuesday Night Live, so watch this link for availability, quantity, color, etc.; the label has also done tapes for Princess Reason and Wildhoney, in case you were wondering. Halfsour previously released via Ride The Snake a dandy of a split EP with Boston luminaries Reports in late 2014, which you can purchase from Jigsaw right here.

>> We're longtime fans of Brighton, England's Faux Discx label, in part because the outfit supplies a keen look into a vital slice of the UK underground. Interestingly, the label's latest is shining a light on a terrific act native to these United States, namely Reston, VA space-pop foursome Fall Seattle. The act's self-titled debut, due next month, was two years in the making. And the wait was worth it, based on three very dreamy preview tracks that cast big guitars and sublime melodies within songs the hint at a firm push-and-pull between dream-pop and reigned-in, post-punk influences. The brisk opener "Carol" pairs punchy bass and clangorous, chiming guitar stabs for a spiky composition perfectly topped by a charming, adenoidal tenor. Fall Seattle quickly turns lush on the succeeding track, the winning "Wanda Jackson," which sets sparkling guitar leads against murmured vocals to deliciously gauzy effect. The glimmering strummer "Time" feels especially romantic and recalls the understated and underrated California Snow Story, an act that, incidentally, recently announced its return. An earlier version of "Time" from 2014 is also well worth a listen, although there are few if any structural differences between the two versions, and the differing production values reveal nothing revelatory; it's just a good song that you should listen to more than once, yeah? Faux Discx releases Fall Seattle Feb. 5 in a limited edition of 100 cassettes, and you can already pre-order one right here. Hit the embed below to stream the aforementioned three cuts, which also happen to open the record. We don't see any information about a release show or touring, but we suspect if you watch the band's Facebook dojo information will be forthcoming. Fall Seattle formed in 2012.

>> Given Rocketship's primary auteur Dustin Reske is a bona fide pop genius, it's safe to assume that when it feels like his song is trying to make a point, it probably is. The thought came over us as we listened to the act's dazzling new single "Sleeping Pills," a deliriously upbeat and bright pop gem whose lyrics steadily reference certain of the band's classic recordings. When the old album and song titles caught our ear, we took a look to see if the lyrics were on Bandcamp, and we were pleased to find them there. They describe a relationship in trouble, but we couldn't help but wonder if it wasn't Mr. Reske's relationship with the music industry itself that he was actually singing about. An unedited version of an interview he gave last year, posted to the Rocketship web site, details Reske's forthright opinions on the problems with the business of music. Given that, it's easy to construe lines like "We shared 'A Certain Smile...' but you sold everything, it don't compute, now there's just a certain sadness and ambiguities about the loot" in more than one way. Speaking of Rocketship's older stuff, a Kickstarter for the reissue of the band's absolutely titanic 1996 Slumberland LP A Certain Smile, A Certain Sadness on vinyl is said to be starting next Wednesday or Thursday (!!!), and in the aforementioned interview, Reske stated a new Rocketship record titled Thanks To You would follow quickly on the heels of that reissue. If "Sleeping Pills" -- which previously had only been available at Rocketship's surpassingly rare 2014 live dates in San Francisco and New York -- is any indication, the new LP should be very satisfying for fans. Stream "Sleeping Pills" via the embed below, and start scraping together your cash for the big Kickstarter next week.