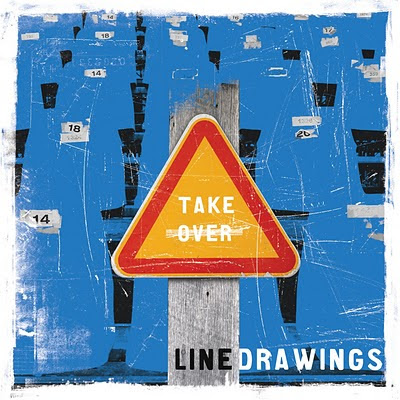 What alchemy transforms a good indie guitar band into a great indie guitar band? There must be myriad answers, and, in the case of Line Drawings, fronter and guitarist Pat Haid says it all comes down to the simple fact that the quartet tried harder this time around. But even so the substantial leap forward demarcated by the Sydney, Australia-based quartet's recently issued debut full-length Take/Over sparks speculation: where the hell did these guys come from, all of a sudden?

Crystalline guitars, vocals desperate and resigned, punchy drumming, atmospheric synth: these are the building blocks of a great sound, and Line Drawings arrange same with artfullness and restraint. Sure, it would be foolish to discount the roles respected Australian producer Wayne Connolly's mixing and production and Bob Weston's mastering play in elevating these recordings, but it comes down to excellent songwriting and credible performances. The indie rock concern's self-titled 2009 EP was good (the thing sold out, although Mr. Haid admits it was not much more than a demo), but Take/Over's emotional impact and sparkling production declare the quartet has mastered its form.

All of Take/Over, which was preceded in May by the single "Sleeplines" b/w "Twist And Go (Merry Go Round Version)," builds to the crescendo that is the relentlessly cascading, pensive album closer "Disremembering." As the song enters its thundering sixth minute Line Drawings sound determined to bring resolution to the proceedings by force. The collection commences with the catchy, uptempo and slightly discordant rocker "Fly" and continually lands punches that pack both power and pop sense. "Twist And Go" bounces with a flavor similar to the late, great The Godrays' "Both Your Names (Janus' Creepy Girlfriend)." "Sleeplines" crunches with effortless cool into a powerful chorus smothered under buzzing rhythm guitar and popping and buoyant lead lines that recall the work of Archers Of Loaf's Eric Johnson. Take/Over was issued in June in Australia and New Zealand by Other Tongues; North Americans can buy the set from ITunes here.