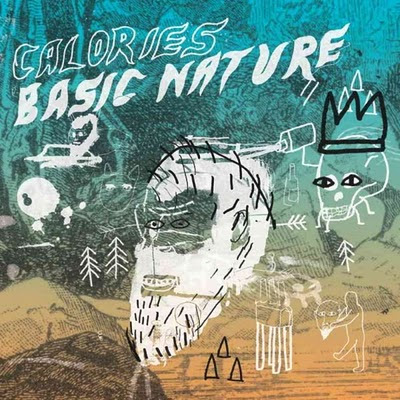 The fact that this record was originally to be titled Habitations and released months ago on an entirely different label doesn't necessarily account for a more-pronounced emotional polarization in Calories' music, but it is an interesting parallel. Heretofore the Birmingham, England-based post-punk threesome was known for power, economy and exuberance. Calories' revelatory 2009 full-length debut Adventuring conveyed a sense of optimism and possibility. By contrast, Basic Nature is more emotionally complex and more texturally varied, and the record carries a weightier sense of reckoning and resignation (indeed, even the album titles connote disparate temperaments). Sure, the manic, fist-banging first single from Basic Nature, "FFWD," as well as the exhilarating, would-be title track "Habitations," hew closely to Calories' familiar, post-punk sound, but the cares and worries that elsewhere populate Basic Nature suggest the optimism of Adventuring has been tempered, that Mssrs. Dixon, Biggs and Whitfield have taken the measure of people and are less than confident with the results. People let you down.

The set pieces that bookend Basic Nature and carry its title underscore the primitive that lurks beneath. The first is a boxy aural assualt of a bass-and-drums vamp, the second a bloopy, loping pastiche that fades into a decaying drum pattern. And then there is "Altitude Sickness," an almost disorientingly sweet acoustic ballad ("there's peace at this altitude"); a second acoustic track "The Offer" is no less affecting. The chorus of "Endlessly In Light" is almost painfully tender (despite the opening and closing lyric "you were wrong, you were all wrong, we were fine"). Of course, as referenced above, there is still plenty of upbeat material. The blistering, quasi-opener "You Could Be Honest" is perhaps the band's most desperate shouter to date, and bassist Pete Dixon's vocal expresses bottomless (and, at the song's climax, literal) regret.

Despite the broader palette of sounds and styles on Basic Nature, we wouldn't say that band has loosened up or settled down. It's more like you turned them into thick panes of glass, laid them out on a table and bludgeoned them with a hammer for a little bit: the shards spread a little. However one characterizes the changes, Calories' music remains tightly focused and the act continues to champion brevity. "Habitations," at 3:44, is the threesome's longest recorded composition to date, eclipsing Adventuring's closer "Forests Of Varg" by an entire second. Tough Love Records releases Basic Nature in the U.K. Monday. Below is a stream of a non-album track to whet your collective aural appetite.