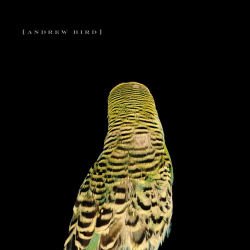 On his new album, Armchair Apocrypha, singer and multi-instrumentalist Andrew Bird shows he can compete in the realm of lush, literate indie rock with any of the bigwigs out there right now -— be they The Decemberists, Arcade Fire or Spoon. He’s that good.

Andrew Bird’s seventh release and first on Fat Possum, Armchair Apocrypha features plenty of clever turns of phrase, moody soundscapes and even atmospheric whistling. Bird, a classically trained violinist, teams with touring drummer Martin Dosh and several other musicians to create a rich tapestry of sound that surrounds his cerebral songs. Bird’s vocals vary from low-key throughout to soaring falsetto on “Dark Matter” and “Armchairs.”

“Do you wonder where the self resides/is it in your head or between your sides/and who will be the one who will decide/its true location,” Bird sings in “Dark Matter.” On lead track “Fiery Crash,” Bird explains a superstitious preflight routine: “To save our lives you’ve got to envision/the fiery crash//it’s just a formality/why must I explain?/just a nod to mortality/before you get on a plane.” Other songs cover topics such as the scientific process of mitosis (“Imitosis”) and the similarities between the current situation in the Middle East and ancient civilizations (“Scythian Empires”).

After years of guesting on albums from My Morning Jacket, Kristin Hersh and Squirrel Nut Zippers, Armchair Apocrypha establishes Bird as a solo force to be reckoned with. the set was released March 20. Currently touring Europe, Bird returns next month to play a string of U.S. dates. Full dates are online here. -- Jay Kumar

Andrew Bird -- “Heretics” -- Armchair Apocrypha
[right click and save as]