Review: E.R. | This Conspiracy Against Us [MP3s] 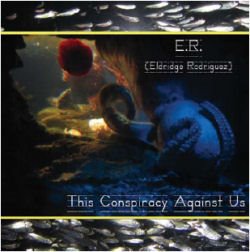 For those of you keeping score at home, at the moment Boston-based post-punk quartet The Beatings has almost as many side projects as band members, all of them containing a different arrangement of many of the same players. It would make for a very good Venn diagram. Things could get pretty darn hectic, as The Beatings also report they are working on a third full-length and sixth proper release, which will be the band's follow-up to last year's ambitious Holding On To Hand Grenades. In the meantime, E.R., a Beatings side project named for and featuring co-singer/co-songwriter Eldridge Rodriguez (not his real name), has issued an emotional wreck of a debut entitled This Conspiracy Against Us.

The 14 songs contained herein are not too far removed from those of The Beatings, which is little surprise considering Mr. Rodriguez's songwriting contributions. For example, E.R.'s "Why I Fear The Ocean" is melodically reminiscent of The Beatings' excellent "CoIntelPro." Although The Beatings' searing guitar assault and exorcising aggression are somewhat dialed back for This Conspiracy Against Us, a characteristic intensity remains. On "Planet's Fall" in particular Rodriguez's vocals sweat out sentiment like a pitcher of beer in the summer. If there is an element of surprise to This Conspiracy Against Us it can be found in the broader instrumentation deployed by Rodriguez and an able stable of sonic henchpersons. Acoustic guitar, violin, piano and organ serve well the quieter tunes on the set. In fact, some of its finest moments rest within the stirring ballads such as "Lexington, KY" ("Everyone's got a plan and everyone's plan sucks...") and "Tirefire," both album highlights. E.R.'s debut was issued Feb. 27 on Midriff. Localites can watch the band perform in the flesh at P.A.'s Lounge Friday, March 30, in Somerville, Mass. (which we believe is the same show The Mitchells will be playing that we mentioned earlier here).

[buy This Conspiracy Against Us from Midriff here]