Review: Exploration Team | We Are Birds, We Are Trees [MP3] 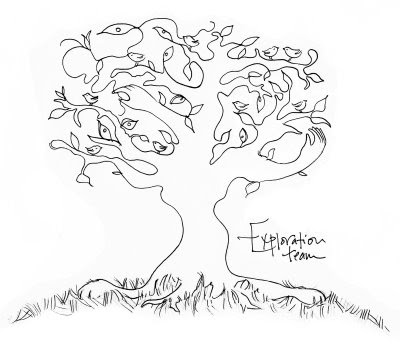 Not long after embarking on our investigation of A Weather scene-mates Point Juncture, WA, we received an email from a bona fide A Weather side project, Exploration Team. The Portland, Ore.-based quintet is led by A Weather guitarist Aaron Krenkel (not to be confused with fronter Aaron Gerber -- apparently every third indie rocker in Portland is named Aaron). Mr. Krenkel's wife Alynn (we assume Alynn Nelson, also of the A Weather cohort) sings and plays keys on some if not all of the tracks on the act's recently self-released We Are Birds, We Are Trees, a fine collection that twinkles and rocks and whispers. The quintet trades in low-key and patient indie rock that carries a veneer of '70s AM pop: it's something in the easy, optimistic delivery of the lyrics and the pastoral sounds of acoustic guitar and chimes. Exploration Team may not rock as much as The Partridge Family, and it isn't as creepy as The Carpenters, but it is hard not to conjure thoughts of those combos when bopping along to "Basin And Range."

Elsewhere, Krenkel occasionally sounds like Belle & Sebastian's Stuart Murdoch. In fact, the throbbing album highlight "The Ocean Will Rise" begins with some rising guitar that echoes the opening of the Scottish act's "If You're Feeling Sinister." Krenkel reports that "The Ocean Will Rise" had been considered as an album opener, but ultimately it was deemed too long -- it's more than six minutes -- for an opening salvo. "Safe And Sound" soars to its conclusion before folding itself up into a quietly shuddering delay and guitar figure; the track is perhaps the most obvious single from the set, were one to be selected. The slightly darker "Just Beneath" more closely follows the A Weather template, but that doesn't diminish it in the least. There is a particularly remarkable degree of tension as the song passes the three-minute mark and leverages a quiet snare tattoo to mount a crescendo. The album ends particularly strongly, as the romantic thriller "Something To Lose" is perhaps the most dynamic track of the collection, but is tucked away in the penultimate slot. There is some discussion concerning Team Love digitally distributing We Are Birds, We Are Trees; we'll keep you posted. In the mean time you buy the collection by messaging the band at its MySpace domicile.