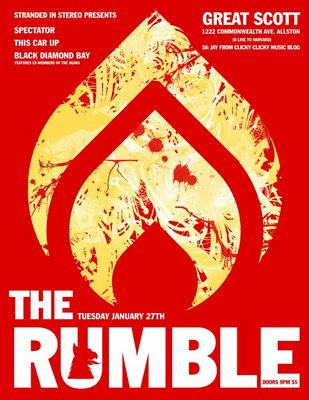 Dany Sloan from ExitFare has asked us to DJ ahead of and between sets on Tuesday the 27th at his debut monthly The Rumble event at Great Scott, Boston, which we're pleased to do. You can expect to hear new sounds from Boston, Philly and the U.K., as well as a few classics, because we're the kind of blog that will force you to confront the greatness of things like Lemonheads' "Year Of The Cat" or The Trouble With Sweeney's "The Snitch." We don't plan on spinning actual vinyl, so we'll have plenty of time to sit and drink beer with you if you show up. The live bill looks very good, and includes Spectator, This Car Up and Black Diamond Bay (ex-The Dears). We're especially excited to see This Car Up, as we've just discovered their 2008 set and are becoming big fans. Doors at 9. Five American dollars. 1222 Commonwealth Ave, Allston Rock City. Be there. Wear pants.
Posted by Unknown at 1/24/2009 10:29:00 AM

Email ThisBlogThis!Share to TwitterShare to FacebookShare to Pinterest
Labels: Black Diamond Bay, Spectator, The Dears, This Car Up

I am the Yachting type. If I do not find your music pleasing, I will have my $5 American refunded. Yes.