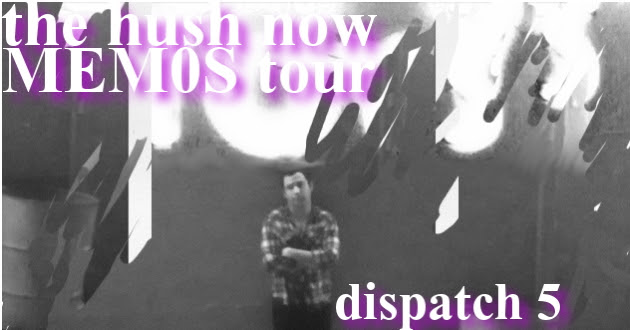 [In this episode of The Hush Now's Memos Tour Diary, fronter Noel Kelly offers his account through gritted teeth of a tour going haywire, with levels of strife that recall Sex Pistols' doomed January 1978 tour of the United States -- well, without the drugs, violence and John Lydon quitting at the end to form PiL. THN has been taking what has become the very long way around, touring a large swath of the U.S. en route to a hotly anticipated homecoming show Saturday at Precinct in Somerville, Mass. Oct. 22 with Soccer Mom and Chandeliers. We reviewed The Hush Now's new record Memos right here. -- Ed.]

After a great day in Northfield, MN, we made the six-hour hump to Milwaukee for a show at Frank's Powerplant. The venue itself was pretty cool. The bartender, originally from south London, poured a stiff drink and provided a certain respite as a couple of jackasses cut their acoustic chops on Duncan Sheik covers open-mic-style, while their girlfriends fawned over the self-indulgences and saccharine sentiments of their "rock star" boyfriends. At one point, one of the gentleman refused to pass his Ibanez acoustic to the other gent and proclaimed, "you have to hear this song," and then proceeded to stumble into "Shimmer" by Fuel. He was wrong. No one needed to hear that. Ahhhh, what to say... Shameel, Shamozzle.

Salvation was only a few hours away as we pulled into Indianapolis to play the historic Melody Inn the next day. I absolutely love the Melody Inn. I remember playing there with Cerulean about 8 years back. It's a place with a long and rich history; from what I understand, a place where Wes Montgomery himself cut his chops back in the day. This is a musician's bar run by owners who not only care about music, but also care about the musicians who play their club. We stopped in early to find one of owners, Rob, was behind the bar scrambling to replace yet another local headliner that had just canceled that day. Kudos to our valiant booking agent for a real bang-up job. It's been one thing after another after another on this tour and "frustration" doesn't begin to capture the feelings of the six guys slogging it out on the road -- another story perhaps for another day, though. We set our minds and hearts on getting some Cajun food down on College Avenue before unloading and preparing for our set.

We shared the bill that night with a terrific act from Asheville, NC, The Stereofidelics, comprised of Melissa, a drummer who also played violin like Itzhak Perlman, and Chris, a guitar virtuoso who played and sang lead, and played bass with his feet. They put on an incredible show and were, honestly, humbling in their approach, proficiency, talent and stage presence. They traveled lightly in a van with two new boxer puppies. If you have a chance to see the Stereofidelics, don't hesitate. Thank you to Rob and staff for making the best of the cancellation: we owe you and the Melody Inn one, and hope to see you in the future.

Back in the van after the show, we high-tailed toward Knoxville for gig at the Preservation Pub. Good pizza, not one of our better shows. But we learn our lessons, pack the van and start towards Asheville. We arrive early in the day and take care of some sundries, check into a hotel, and then head over to the One-Stop for pickled carrots and gourmet grilled cheese sandwiches. Then we head to the "other" side of town to Mike’s Side Pocket for our show. Seeing as there was no PA to be found, the stage -- if you could call a four foot by four foot square podium a stage -- was occupied by some locals watching NASCAR who didn’t look all too happy they might have to vacate, there were no supporting acts on the bill, considering that the manager didn't know there was even a show of any kind and the clientele didn't seem all to eager to have their evening interrupted by our style of music, which was completely understandable, we once again thanked our booking agent (best money we never should have spent) and agreed to a PBR on the house before heading back to the hotel to catch up on some rest.

Only six hours to Greenville, NC, to the Tipsy Teapot where, once again, the headlining act canceled and we had an opportunity to play to an empty room with some more bands pilfered from a Craigslist advert for the other supporting acts, one of which included two nice-enough fellas with guitars turned up to 11 hammering through their first metal show ever. I'm starting to find it interesting at this point that not one band we've played with on this tour (if they did actually show) has brought one person out to the show. Hmmmm... interesting indeed. I hope a trend is becoming evident.

We set our sights on CMJ and played our hearts out regardless. We packed up the van and Pat made a Homeric effort, driving through the night on a 12-hour slog passing back through Asheville (would’ve been nice to play Asheville -- oh wait, we were supposed to play Asheville) to Nashville to share a bill on the outskirts of town, behind what was advertised as "The World's Largest Adult Store" with yet another high school band (screamo/hardcore) chaperoned and playing their first show. Another Craigslist gem. We played another slamming set and then headed into town to historic Roberts on Broadway to see what may have been some of the best live country music I've ever seen. Until last night, I thought I knew how to play my telecaster. I was wrong. Well, it gives me something to strive for. I can't remember the name of the band, but they'll be locked in my brain until the day I die.

Tomorrow is Lexington at Cosmic Charlies. A great venue from what I hear, but we definitely have our fingers crossed to see who we'll be playing with this time around. I keep saying, "Well, there's no point in getting mad, it can't get any worse." I was asked to stop saying that last night by the band, because every time I say it, well, you get the idea... fingers crossed and here we go. And we really can’t wait to get back to Boston to play the Clicky Clicky and Ash Gray Proclamation show on the 22nd at Precinct. That and CMJ are the only things keeping the spirits of the band afloat at this point. We're getting scary good on this tour, regardless the setbacks. We will not be deterred. -- Noel Kelly