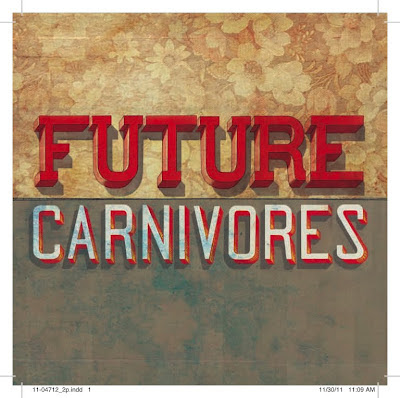 Future Carnivores accomplish here on their eponymous full-length debut an elegant feat: the Boston-based electropop act successfully surpasses homage, a mile marker that even if it can be reached often trips up bands mining the motherlode of the early MTV era. To be sure, the record sounds as if it were made in the '80s, not just from a production standpoint, and not just because of certain nods made via the songwriting, but because of Future Carnivores' ability to deftly synthesize deconstructed pop with the same sense of wonder and optimistic, well, futurism as the act's quirky and weird-haired antecedents. Through this terrific alchemy principle members Reuben Bettsak, Bo Barringer and Noell Dorsey (who work with two drummers live) conjure gold by presenting maximalist melodic concepts in diminutive, sleek packages. That winning combination makes Future Carnivores the first refreshing surprise of 2012.

The chirping guitars, vaguely British-sounding vocals, aboriginal rhythms and softened ambient space of the trance-tastic "This Won't Be Boring" perhaps exemplifies best the approach of the band, which de-emphasizes the guitar work central to Mr. Bettsak and Ms. Dorsey's better-known indie rock endeavor Guillermo Sexo in favor of atmosphere and groove. Mr. Barringer's relatively theatrical vocals (which at times recall those of Unrest's Mark Robinson) twinned with those of Ms. Dorsey elucidate yet more singular overtones in the music, which as often draws from New Order as it does Bow Wow Wow. Future Carnivores' pulsing "There Is So Much Love In My Heart," with its understated but precise rhythms, motorik bass line, repetitious vocal incantations, and droning e-bow guitars is another example of the band's beautiful marriage of New Wave and New Romantic aesthetics. "To Win You Over" is even more experimental, providing in 81 seconds a perfectly crafted pastiche of pathos and nostalgia, like one of the shadowbox arrangements generated by the sub-orbital AI in that Gibson novel. Despite the album's bracing experimentalism, the highlight of Future Carnivores is the rocker "What's Unbelievable?" While the song smacks of New Wave bombast, its traditional instrumentation makes it something of an anomaly within the set. Nevertheless, it's a delicious anomaly that listeners will return to again and again.

Future Carnivores has been around for a relatively short 18 months, but has already released "What's Unbelievable?" and "I Can Wait All Night" from this full-length as stand-alone digital singles via Bandcamp. The band self-releases Future Carnivores this week and celebrates with a record release party at the Tiger Mountain club night at Cambridge's Elk Lodge in Central Square [Facebook event page here]. Also performing are Travels, Velah and Poor Everybody. Future Carnivores will have CDs and t-shirts on-hand.