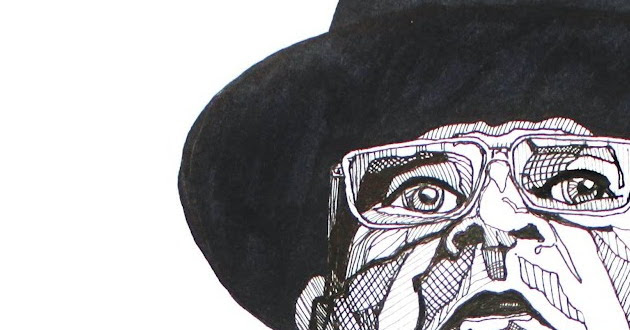 >> We've been meaning to circle back to our recent feature in The Phoenix on Pile, the Boston indie rock quartet whose formidable LP Dripping was released late last month. As the band plays a hotly anticipated tour homecoming show Wednesday night with now-band Metz and Northampton-based leading lights Speedy Ortiz, we figured there's no time like the present. Our conversation with Pile founder and fronter Rick Maguire was both long and interesting. He hand-rolled and smoked cigarettes, we drank some beers, we talked about music, it was delightful. One of the many things we didn't have the space to hammer in our Phoenix piece that we found remarkable was Mr. Maguire's understandable yet surprising lack of familiarity with acts from the late '80s and earlier '90s that Pile sounds like. Sure, he knows Jesus Lizard, Polvo and the like exist. He's even heard some of their records a bit. But Maguire said he wasn't conversant in their music. And then he said (well, we're paraphrasing) what we thought was a particularly smart thing: he said at this point he didn't WANT to know those bands' music well, he wouldn't want to be influenced one way or the other by hearing them at this point. We like that, that independent thinking, that drive to be pure. You can stream Dripping via the Bandcamp embed below; buy it from Exploding In Sound Records right here. It's a great record, dark, drop-tuned, regular outbreaks of mayhem, melody, aggression. The show tomorrow night is going to be awesome. Hit the Facebook event page here for details and to proclaim your faith.

>> Birmingham, England-based indie punk quartet Calories have revealed more about what they are doing these days, and how they are doing it, dispelling some of our questions about the recent revelation of Burning Alms yet adding new questions. So, for starters, Calories announced it will issue sometime around Dec. 1 a new EP titled "DMT," and there is an ace video for the strikingly effervescent tune right here. According to the band, the video had 1,000 views in just five days, which is none too shabby. As you can hear from watching the zany, "Benny Hill"-esque clip, "DMT" has a lighter touch that Calories' heretofore characteristic dense, blunt and forceful attack. Indeed, "DMT" is downright jangly. What else? Well, a Facebook status from the band refers to not one, but two new side projects. There's Burning Alms, which we already wrote about here last month, which is referred to as Thomas Whitfield and John Biggs'. But there is also a new bass-less project being helmed by Calories bassist Pete Dixon called Sunshine Frisbee Laserbeam, who is joined by two chaps Andrew Bullock and Ralph Morton. Sunshine Frisbee Laserbeam has apparently been busy making rock and rock videos as well, as evidenced by this recent video for the very great tune "Halloween." So chew on that, why don't you? No word yet on what formats Calories' "DMT" will be available on or what label will release it, but we'll keep up our vigil and bring word about the EP when we can. In the meantime, how about streaming Calories most recent, and quite excellent, full length Basic Nature via the embed below?