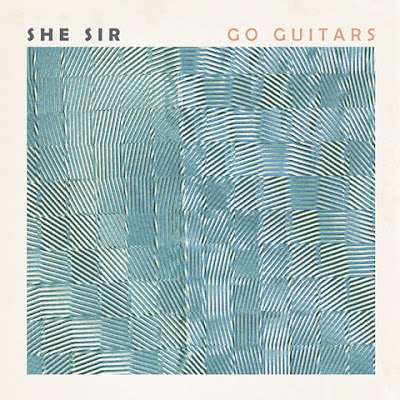 Whether it's successfully fusing genre signifiers from disparate decades, incorporating subtle and smart rhythms within its compositions, or even pulling through on years-long recording hiatuses, Austin-based quartet She Sir has made its name on finesse. The group revels in a thoughtful and careful approach, tinkering away at their perfect, distanced sound [forever. -- Ed.] with a patience that chagrins those addicted to the band's shoegazing pop. Finally, after years of starts, stops and whispers, She Sir is releasing its full-length debut, Go Guitars. It is a tour de force of sunny, spectral and shimmering rock that will be issued by Shelflife on vinyl and CD Tuesday, Feb. 25.

Abetting core players Russell Karloff (vocals, guitar, bass) and Matthew Grusha (vocals, bass, guitar) these days are Jeremy Cantrell on guitar and David Nathan on drums. And, right away, the power of the larger lineup is apparent: sure, opener "Portese" not only commences with the band's characteristically evocative guitar textures, but it also quickly communicates a subtle departure. With much more straightforward and foregrounded drumming and funkier bass work, the tune trumpets She Sir's shift in sonics away from the noise-pop of its stunning 2006 EP Who Can't Say Yes and the '60s psychedelia of the Yens 7". As Mr. Karloff told us a year ago, "It's really a blending of everything we've learned over the years. At this point, we're experienced enough to know exactly what it is we want to do, and we finally know how to achieve it." In press materials, the quartet points to Fleetwood Mac as a current influence. That iconic band, as well as a more general '70s (and even '80s) soft-rock studio vibe, seems to have captured Mssrs. Karloff and Grusha's restless attention. The combination of the two makes for some of the most relaxed, positive and forwardly sexual shoegaze Clicky Clicky has encountered. The singles for the new long-player, "Kissing Can Wait" and the previously reviewed "Condensedindents," each trade in such bright melodies and bouncy rhythms that sunshine, bikinis and dockside barbecues all feel like appropriate imagery, in contrast to the shoegaze genre's more typically dour evocations.

While the aforementioned yacht-gaze dreamers flank Go Guitars, the meat of the set boasts more strummy cuts, and tunes that employ quieter sections before flooding the stereo field with light in serial, monolithic choruses. "Bitter Bazaar" stages a moody breakdown at the two-and-a-half-minute-mark that transports listeners away from the summer fun to a romantic, air-conditioned moment of tension. "Mania Mantle" activates a pleasing, Jesus and Mary Chain-styled chug. The delicate acoustic guitar back-tracking of "Winter Skirt" echoes She Sir's absolutely flawless "You Could Be Tiger" single from 2012. Notably, throughout the album Karloff's soft vocals and the snappy percussion conspire to tie everything together. The approach highlights the fact that, despite the complex arrangements, there are actually not an overwhelming number of tracks in the mix, which makes it quite likely that She Sir can reproduce Go Guitars live.

Admittedly, this reviewer was hoping for some more non-traditional and classical instrumentation, after the fashion of previous songs such as "Lemongrass," a tune that masterfully married an indie sensibility to the band's academic background. Even so, Go Guitars finds the quartet in fine form, and reveals a looser iteration of the group that is clearly in command of the moment. In a current musical climate that emphasizes celebratory and hypnagogic beach-pop from hip corners of the country -- often of questionable substance -- She Sir once again show just how far that sound can go when approached with compositional expertise, patience and the lessons and benefits of time. Do yourself a favor, and give She Sir and their tremendous new collection yours. The band plays a record release show next week in Austin at The Mohawk, and is also slated to perform during the annual South By Southwest music confabulation next month as well. Purchase Go Guitars from Shelflife right here. -- Edward Charlton

Selected Prior She Sir Coverage:
Who Could Say No? The Clicky Clicky Interview With She Sir's Russell Karloff
Today's Hotness: She Sir
Review: She Sir | Yens EP
Best Of 2006 Addendum: She Sir's Who Can't Say Yes

Email ThisBlogThis!Share to TwitterShare to FacebookShare to Pinterest
Labels: Fleetwood Mac, She Sir, The Jesus And Mary Chain