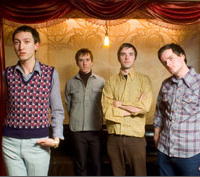 Aloha's fourth full-length Some Echoes thrives on understated tension emphasized by persistent marimbas, thoughtful guitar and deft drumming. The geographically challenged, nine-year-old quartet converged on Arlington, VA to track the 10-song set, which continues down the somewhat more pop-oriented course the band has charted for itself since 2004's fantastically titled Here Comes Everyone. Traces of the act's prog-leaning, Genesis-reminiscent flavors found on 2002's Sugar still persist, but Aloha is starting to cop from the other dial and bleed into the sort of '70s AM sounds the Flaming Lips currently embrace. In fact, Aloha singer Tony Cavallario's voice sounds very similar to Wayne Coyne's on Some Echoes' stirring ballad "Ice Storming." Some Echoes streets April 11 on Polyvinyl, and the band will tour to support it throughout much of March and April. You can find two tracks from the forthcoming record at Aloha's MySpace pup tent. The first is the stutter-stepping "Your Eyes," which you can download, and the second is the absolute best jam on the album, "Weekend." Incidentally, this latter track reminds us of The Cab of Death's high-quality indie rocker "For What Reason," which was on 2000's We Have The Facts And We're Voting Yes.