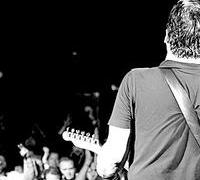 >> Billboard reported here Wednesday that Greg Dulli, who in the late '80s and '90s led alt.rock heroes Afghan Whigs, has completed his fourth record as Twilight Singers. The forthcoming set Powder Burns will street on One Little Indian May 16. The record has 12 tracks and features contributions by Ani DiFranco and former Whigs bassist John Curley. Dulli plans to debut the material during two shows at SXSW and he will support it with a couple dozen dates beginning May 20 according to the Twilight Singers news page here.

>> It's a twofer for Billboard today. Turns out that for some reason Rhino is reissuing the first four Cure records March 28, despite the fact that all of them were reissued in awesome remastered and expanded versions last year. Rhino's reissues are remastered and include new photos and full song lyrics. I can't think of why this would appeal to anybody as long as the expanded versions are in print, but perhaps there is some solid business motivation here I am not seeing. Here's the Billboard report [second item].

>> Word on MySpace is that the original Bad Brains are back and touring and have a new album in the can produced by Beastie Boy Adam Yauch. This sort of sounds like old news to me, but perhaps I am getting it confused with the recent shows the band played with Cro-Mag John Joseph. Keep your eye on the Bad Brains MySpace site for further bulletins as events warrant.

>> Finally, it turns out all but one of the Witch dates we posted last night (see below) are confirmed, per the band's press guy. The first date, March 18 in Austin, Texas, is apparently not happening, and as such we've put a line through the listing. That said, if you see four guys walking around Austin that day with hair in their face and they are carrying gear, it might be a good idea to follow them. You never know.
Posted by Unknown at 2/22/2006 07:14:00 PM