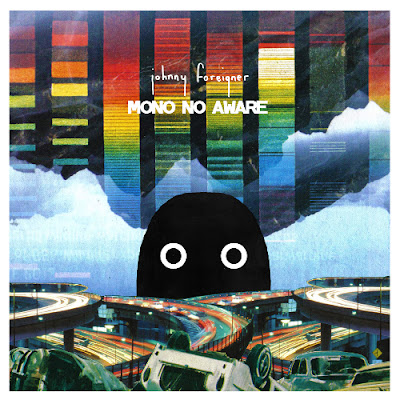 In the key scene of the 1997 film that takes its name from the quote, Jack Nicholson's Melvin Udall remarks to fellow patients populating the purgatory of his psychiatrist's waiting room, "What if this is as good as it gets?" It is an unsettling and even disorienting idea, that what you have and what you are, your construction of your self, are unlikely to ever again change for the better. But (thankfully, as it makes this painfully protracted metaphor work) Mr. Udall does change, and grow, spurred by renewed self-awareness and a revitalized sense of self. Far from being a condemnation to a static, flat existence, a revelation such as Udall's can be freeing. That weightless feeling of revelation-fueled freedom powers the tremendous new long-player from Birmingham, England guitar-pop titans Johnny Foreigner.

Johnny Foreigner, of course, was at nothing like Udall's dead-end prior to the release of Mono No Aware, its fifth album. Quite to the contrary, we've often referred to the four as England's greatest band, and it has created one of the most enviable catalogs in independent rock music, ever. But -- as co-founder and guitarist Alexei Berrow told Upset Magazine here earlier this year -- the veteran act has had to come to terms with its station within the pop music firmament, and now eschews focusing on negative externals and orients itself toward simply being the best band it can be for a frothing fan base cultivated with great care over the last decade.

Call it real life (births, deaths and near-deaths), call it maturity (marriage, parenthood): whatever "it" is, it has caught up with Johnny Foreigner, but none of it has blunted the legendary band's fire and passion [excised refutation of Neil Young's tired binary]. Indeed, the quartet's new set is invigorated by and celebrates the stuff of life, from Mr. Berrow's opening incantation/confession/deep insidery reference -- the Udall moment, if you will -- "it stings to admit, I can't foresee a day when we buy speedboats from this," to the ensuing recitation of his recent brush with mortality ("literally centimetres away from death," he told Upset) in the instant classic "Undevestator" (which, as we noted here, would seem to present the inverse of "Devestator," the closing number of the band's triumphant fourth LP You Can Do Better) and onward through the collection's 11 songs. Chief songwriter Berrow doubles down on incorporating -- deftly, pellucidly -- autobiography into the music ("...it's lucky sadness triggers the songs..."), making the stuff of life part and parcel of the band's capital A Art using a mature lens whose poignancy springs from the album's titular concept.

There is an astonishing amount of detail packed into its briskly paced 35 minutes, yet Mono No Aware succeeds in every direction. There are the blitzkrieging singles and should-be singles that are Johnny Foreigner's stock-in-trade, such as the brilliant rager "If You Can't Be Honest, Be Awesome" and fiery "The X and the O," respectively. Other successes are perhaps more subtle but substantially more exciting. Even 10 years on the band continues to best itself in terms of songcraft, adding progressive flair to a genre which -- let's be honest -- too often gets to coast on the right chords, the correct pedals. The brightly burning centerpiece of the record is the wild, vivid and deconstructed anthem "Our Lifestyles Incandescent," whose verses feature thrilling vocal arrangements structured around the voice of Chicago polymath Nnamdi Ogbonnaya. Indeed, impressive vocal arrangements are a hallmark of the set.

Johnny Foreigner even weaves intricate and beautiful sonic detail into its bangers on Mono No Aware, as in the final, orchestral section of the aforementioned "If You Can't Be Honest" (which touts strings and horns arranged by the great Nick Cox, formerly of Sheffield, England progressive pop luminaries Screaming Maldini and now out under his own shingle as a composer/producer/arranger). Mono No Aware closes with a sublime fade-out, largely along a sustained low D before the chord progression resolves, a terrifically smart echo of the delicate notes of the aforementioned "Mounts Everest." The effect, for the put-it-on-Spotify-and-put-it-on-repeat generation anyway, is of a dream starting over every time the crushing, sparkling ballad "Decants The Atlantic" -- which is among the greatest (and most self-aware) songs in a Johnny Foreigner oeuvre rife with sublime album closers -- slips beneath the proverbial waves and is reborn with "Mounts Everest." It's magical sequencing compounding brilliant songwriting.

Despite having a decade under its collective belt, not to mention four long-players and a dizzying number of singles and EPs, Mono No Aware is completely devoid of complacence, and perhaps this is why Johnny Foreigner could never find itself in Udall's tight spot in the first place (remember Udall, from the first paragraph?). Instead, the record celebrates perseverence and a career staked out largely on the band's own terms (especially when it mattered). The album was released Friday by the venerable Alcopop! Records in the UK and in the U.S. by Philadelphia's Lame-O Records. The domestic LP is pressed to pink media and is available in a limited edition of 300 pieces, which can be purchased right here. UK fans or dedicated fans willing to shell out for jazzy imports have a broader array of purchase options. In addition to a traditional compact disc of vinyl 12", bundles are available which deliver the music alongside your choice of a t-shirt, posters by guitarist Lewes Herriot and Irene Zafra, some sort of movie script dealie, badges, and yet more posters (there are 10 posters relating to songs on the album, and true heads flush with cash can get the 10-poster Royale With Cheese bundle right here). UK vinyl is an edition of 200 blue pieces and 500 orange pieces, and by the time you read these words the blue may have sold out. That's what you get for ignoring our advice Friday morning. Stream Mono No Aware via the Sporkify embed below.