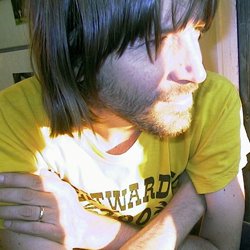 >> After spending much of Sunday night looking around online and pondering whether we need to buy a copy of The Lemonheads' Favorite Spanish Dishes EP -- which includes the awesome song "Paint" -- despite already possessing some very nice-sounding 192 kbps rips of its five tracks, it seems sort of like kismet that news came over the teletype this morning that sole remaining original member Evan Dando has signed his band to Vagrant. With two members of pop-punk legends The Descendents as his rhythm section this go-round, might Dando be making a return to the superlative, more rough-edged pre-1990s Lemonheads sound? That would be awesome. Reports on recent live performances over at the Lemonheads message board indicate Dando has been playing some tunes off the band's 1989 set Lick. More chatter at PunkNews here, and here is the presser Vagrant issued. Vagrant, for those of you keeping score at home, has also recently signed The Futureheads and The Hold Steady, and would seem to be turning into something like a powerhouse. Of awesomeness.

>> Sounds like that Rollins Band tour will be in August, at least according to Henry Garfield's latest blog post here. Not sure if we already reported that.