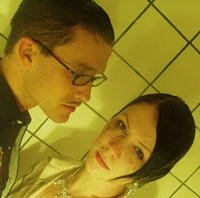 >> Creepy pop deconstructionists Xiu Xiu have completed recording a new set titled Air Force, which will be released by Kill Rock Stars Sept. 12. The act is touring Australia, New Zealand and Europe between now and the first week of June. Xiu Xiu was recently interviewed for a podcast at the Great American Music Hall in San Francisco during the Noise Pop festival -- check it out here.

>> Venerable indie label Domino is promoting a new compilation of music from its artists by offering free exclusive downloads for five days beginning April 17. The comp is called They'll Have To Catch Us First and there is a very cool Flash minisite for the disc right here. But the free exclusive downloads (from Domino acts Arctic Monkeys, the now defunct Test Icicles, Archie Bronson Outfit, Adem and Psapp) will be offered through UK download storefront TheDownloader.co.uk starting Monday. Don't space this.

>> Billboard here interviews Built To Spill fronter Doug Martsch, who is recuperating from surgery for a detached retina just as the indie rock act's sorta comeback hits stores. Nothing very interesting in the article, except the fact that no one (not just Billboard) seems to want to tell us how Martsch's retina got detached in the first place. C'mon, reporters, do we have to go and use a search engine to figure this out? Fine... Typing... OK, apparently he was injured while playing basketball. Was that so hard, reporters?
Posted by Unknown at 4/15/2006 02:06:00 PM