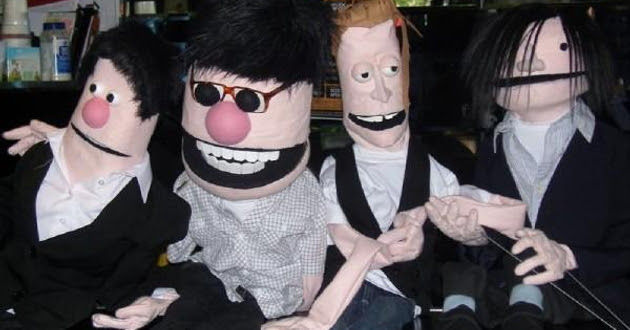 >> Up until about a month ago the name Dolby Anol would have simply been part '80s new wave icon, part gibberish to us. But then the name became attached to one of the remixes on the forthcoming Johnny Foreigner single "Salt, Peppa and Spinderella." And somewhere thereafter we learned that Dolby Anol was the nom de remix of a duo that includes at least one member of Glaswegian fight pop septet Dananananaykroyd, whose angular, intense indie rock references some of our favorite D.C. post hardcore sounds. We were very interested, then, to receive this afternoon another Dolby Anol creation, a remix of jittery indie rockers The Futureheads' recent single "Radio Heart." The remix is a fairly in-your-face deconstruction of the dynamic, syncopated jam, the video of which you can watch right here. The remix of "Radio Heart" is successfully transformed by big beat production and electrobass; its release into the wilds of the Internerds is intended to promote the Aug. 4 release of The Futureheads' next UK single, the anthemic "Walking Backwards" [stream it at Youtube here].

More remixes are expected, and a quick trip to the Dolby Anol MySpace wigwam turns up evidence that the duo has also remixed the Sunderland quartet's track "Crash." The Futureheads' third record This Is Not The World was released on its own Nul Recordings label in May. For Dananananaykroyd's part, as we reported over the weekend the band will record with Hoboken-based The Machine beginning in mid-August. Upon returning to the U.K. the band is slated for two tours, one with Johnny Foreigner and another whose headliner is still the subject of rumor. The rumor that appeared in our comments (more on those below) was that the headliner will be Foals, but like we said, that's just a rumor.

>> Online video site Switchburn has posted three very compelling clips of Selkirk, Scotland's Frightened Rabbit performing last month at The Mohawk in Austin. "The Modern Leper," "Fast Blood" and "I Feel Better" are all given the customary deluxe three-camera treatment. We watched "The Modern Leper" and found it to be a somewhat more reserved rendition than we've seen from the chaps on a few occasions here in Boston. Even so, superlative drummer Grant Hutchison occasionally seems one capricious impulse away from laying waste to his kit, even as he eases back somewhat. Watch all three clips at the links above, you won't be disappointed.

>> Since we already broke our promise to ourselves not to mention Johnny Foreigner for a week a couple paragraphs above, we may as well report some interesting tidbits that popped up into our comments the other day. If Mr. Anonymous is to be believed, then the forthcoming 10" "Salt, Peppa and Spinderella" single that will be issued in September is being released on "Pac Man-yellow" vinyl and in a limited edition of 500. Of those 500, only 400 will be going up for sale. Which kind of makes you wonder what they are doing with the rest of them. Hopefully sending at least one to us, and perhaps the remaining 99 go to other members of the press. Doesn't seem like the best way of covering your costs, giving away 20% of your inventory. But as the single potentially serves a dual purpose of promoting the U.K. and North American releases of the Birmingham, England-based trio's fantastic debut Waited Up Til It Was Light, perhaps there is a method to the madness.

Speaking of madness, we were minding our own business today perusing EBay when we noticed that some one is selling here an unplayed copy of Johnny Foreigner's debut single "Sometimes, In The Bullring" b/w "Camp Kelly Calm" for the equivalent of $99.38 plus another $20 or so for shipping, which makes us feel all the more fortunate that we have a copy. The band has recorded "Bullring" an almost incalculable number of times, and it appears on Waited Up Til It Was Light. "Camp Kelly Calm" is a little more of a rarity, so here is a nice rip sent to us by the chap who put the single out.

Holy crap, they were selling those Bullring singles the first time I saw them for a fraction of that price. Wish I'd picked one up now!

I totally live in the wrong country.