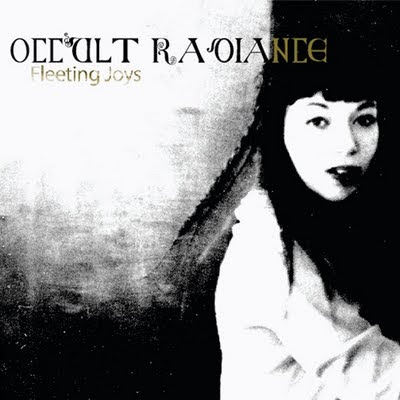 We've been talking about it for more than a year, but the sophomore record from Fleeting Joys is finally here. The elephant in the room when discussing the superlative Northern California-based shoegaze duo is the similarity between its music and the most well-known and inflential portion of My Bloody Valentine's body of work. It bears mentioning and is a useful shorthand, but we expect Fleeting Joys' John Loring and Rorika grow weary of the obvious comparison (they list MBV first among their influences at MySpace) even as they are gratified by it. The aural similarity has led to some pretty silly behavior by seemingly well-intentioned fans. Those who take the time to scrutinize will find Fleeting Joys are more forthcoming with a melodic hook than Kevin Shields' legendary quartet, and while Fleeting Joys don't rush albums out, the duo has released two in the last few years, which is two more than Mr. Shields has released in about two decades. If you are a fan of painstakingly architected and beautifully realized guitar music that bends, pounds and pulses, Fleeting Joys have a lot to offer, particurly on this latest collection.

And of course, listeners who refuse to accept the easy comparison will find there's quite a few bands to which one can point. It's hard to say in which direction the influences may flow, but the crushing opener "The Angels Cannot See You Now" recalls fellow California-based psych-rockers The Warlocks. "Into Sun + Dark" hints at the beginning of Crooked Fingers' cover of Queen and David Bowie's "Under Pressure," but instead of shifting into a traditional rock/pop form "Into Sun + Dark" persists in glimmering, sparkling, drifting in on itself and burrowing under layers and layers of processed guitars. "Dearly Sedated" modulates the main riff of The Swirlies' "Park The Car By The Side of The Road" and adds menacing intensity with pounding, black sheets of sound.

We haven't heard anything about a single being released, but Fleeting Joys has a perfect a-side/b-side pairing in tracks two and three on the new set, the uptempo, pop-leaning strummer "You Are The Darkness" and "Cloudlike Mercury." Both are album highlights, particularly the former. Fleeting Joys released Occult Radiance domestically through its own Only Forever Recordings Aug. 27. Occult Radiance was released in Japan in January on Thomason Sounds with a different track listing and mix. The U.S. release has two additional songs, the aforementioned "The Angels Cannot See You Now" and "Dearly Sedated." The Japanese release is still something of a collector's item, however, as it contains "Closer To My World Without Pain," which is not on the domestic issue. Fleeting Joys debut Despondent Transponder was issued in 2006 and is now out of print. There's no proper freebie promo MP3 from Occult Radiance, but the band has graciously offered up the outtake "Golden Now." Check it out.