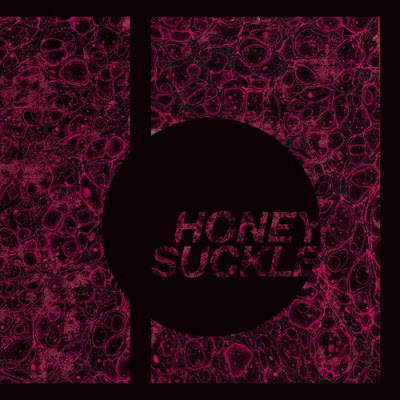 Standard bearers for unyielding, big-guitar shoegaze in Boston would seem to be hard to come by these days, with many of the genre's key regional proponents shutting down, migrating elsewhere, or mutating. The newer school of Boston 'gaze is tempered with pastoral passages, post-rock dynamics and more distinctly American production aesthetics, and the richly melodic, guitar-drenched sound purveyed by now-resuscitated legends RIDE and My Bloody Valentine would seem to have somewhat fallen out of favor. However, that all changes next week, when Bedroom Eyes return with a commanding sophomore set. The Boston foursome's new long-player Honeysuckle -- its first in three years -- places Bedroom Eyes at the vanguard of the city's big-guitar scene, poised for a breakout into the broader American underground on the strength of its moody, sonically aggressive and vividly rendered songs.

Honeysuckle is intoxicating, and its uptempo material particularly so. Buzz-sawing album highlight "Plain Heir" hits like a tsunami of swirling, bending guitars, with deep reverbs elevating the drums and characteristically smeared vocals in the mix. Similarly powerful is "Gypsy," whose churning, distorted guitars and breakneck pace are all blitzkrieg and no ebb. That pacing and surprisingly compact compositions establish a tension with the richness of Honeysuckle's arrangements and production, and this tension is at the core of what makes the set so entrancing. The effect is amplified by the fluidity between tracks; while the album doesn't quite have a continuous mix, songs flow and breathe into each other. Indeed, Honeysuckle employs two beautiful interstitial instrumental compositions to link key tracks like so much edgeless watercolor. First, the arpreggio-led, narcotic revery "(Highsummer)" ties the aforementioned "Plain Heir" to the pretty, mid-tempo anthem "Wild Sins," a tune whose thunderous choruses are set off by dreamy passages of layered guitar leads. The final third of the record is unstoppable; there the interstitial "(Deepwinter)" is sandwiched by the fiery, indefatigable belter "Lorraine" and the tremendous closing title track, which alternates between glimmering verses that call and shuddering choruses that respond.

Part of the narrative pushed with Honeysuckle is that the collection represents a "painstaking reworking" of the Bedroom Eyes sound. Nonetheless, it is striking how our review of the band's spine-tingling 2012 debut could very well apply to the new set. All of the visceral guitars, spectral vocals, saturated emotion and crackling energy the band presented on What Are You Wrong With persist here. Perhaps the production is where the foursome's game feels most stepped-up, particularly the vocal treatments, and a sonic wholeness across the record achieved by a honey-dripping, sub-aquatic ambiance. Despite its familiar building blocks, the new record by any metric is a distinct step forward. Sure, Honeysuckle arrives in the wake of a lineup change and an earlier scrapped LP session, but the painstaking reworking would seem to have rebuilt a reliable foundation, not reconfigure the band's sonic DNA. Whatever; the results speak for themselves.

Honeysuckle is a towering collection, a masterstroke, and so we are very pleased to premiere for you today the entire album via the Soundcloud embed below. Midnight Werewolf Records will release Honeysuckle in a limited edition of 100 cassettes Nov. 24, and the label is already taking pre-orders right here. The release is the first in a series of three cassettes that the label will issue over consecutive months featuring Boston acts (subsequent tapes feature Charles and Pleasure Gap). Honeysuckle will also be available on CD, and the band has already been selling it at shows. Bedroom Eyes just wrapped a short strand of live dates that took it as far south as Richmond; the band's next area show is Dec. 5 at Firebrand Saints in Cambridge, Mass. with Burglary Years, Summer of Aden and Babydriver. Bedroom Eyes also performs the following week with Porches at UNH in Durham, NH, and you can read more about that right here.

thanks! as for big-guitar shoegaze, don't forget about Kindling, whom I first learned about here! Their new 12" EP is out and it's excellent.

Good call, Dan! Kindling is based in Western Mass. and doing something relatively more rudimentary, but you are right, the guitars are big! Expect to read about Kindling more in a couple weeks ahead of a special holiday show that hasn't yet been announced.