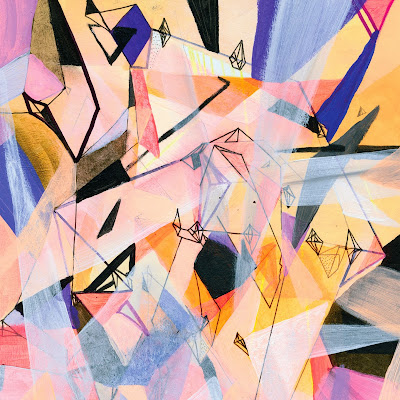 Has there ever, in the now-actually lengthy history of indie rock, been a more apt descriptor for a band than "nervous soul," a tag some likely under-appreciated genius bestowed upon New York funk-punk (errrr... we mean "nervous-soul") quintet Ava Luna?

Ava Luna takes cues from classic soul and R&B, as well as the smart-guy tropes of turn-of-the-'80s bands including Talking Heads and Gang Of Four, and synthesizes them within its own skewed but wholly modern aesthetic. This is not to suggest that Ava Luna's music is overtly clinical: opener "Daydream" or the totally tweaked "Sears Roebuck M&Ms" provide ample evidence to the contrary, expressed in terms of devastating, Parliament-channeling groove. Indeed, Electric Balloon smoothly splits the difference between real-deal soul and the nervy indie rock that Ava Luna principals Julian Fader and Carlos Hernandez have become known for crafting as producers. Call it a late-night jazz club jam remade for the basement shows set, arrived at as much by significant deconstruction and reduction as by appropriation.

Chatter regarding Electric Balloon deems it the more accessible of Ava Luna's two long players. While that may be true, the music is still far from a conventional. Stylistically, the band is all over the place. Bits of jagged, angular post-punk, loose funk, and slow-jam R&B all coexist within the space of these 11 tracks, sometimes skillfully blended, sometimes swapped in an out for one another in rapid succession. What makes the record so compelling (as well as the band on the whole, really), is how fluent and capable the players are in wielding these varied musical vernaculars. It all flows from the rhythm section. Mr. Fader is an especially tight drummer, and locks the band into formidable grooves on songs such as the aforementioned "Sears Roebuck"; he routinely dishes out thrilling and compact fills, even when the song arrangements are at their most stark. He also ably applies nuanced syncopation, like on the stop-start dynamics of late-album highlight "Genesee," where his light touch on the hi-hat is often the only thing holding the sparse arrangement together.

The vocal work from all three singers is impeccable throughout, with Mr. Hernandez, Rebecca Kauffman and Felicia Douglass each taking show-stopping turns at the mic. The band's greatest moment may well be the classic-rock baiting, massive song suite "Plain Speech." Commencing with a brilliant staccato riff from Hernandez, the song deftly shifts to half-time for the chorus while lush vocal harmonies bloom brightly from the pocket like they have something urgent to deliver. They probably don't, and Ava Luna doesn't seem push any particular message. Which is fine by us; we don't need to know the lyrics to groove, baby, and the weight of preachy didactics is probably best left, for present purposes anyway, in the past with the aforementioned Gang Of Four. Blunt politics would only drag down Electric Balloon, and that would be a cardinal sin, as Ava Luna's fluid grace and resolutely cerebral hymns for the hips clearly thrive in their unfettered state. Electric Balloon is out now via Western Vinyl, you can grab it on vinyl or CD right here. Stream the album's two opening cuts as well as the space-ghostly soul ballad "PRPL" via the Bandcamp embed below. The band is currently on tour with bugcore heroes Krill; the remaining tour dates are listed below. -- Dillon Riley