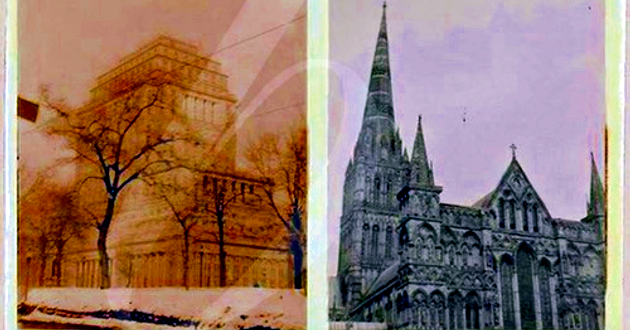 >> Well, it didn't come as soon as we had hoped when we wrote about the band's first EP here two years ago, but Mooncreatures are indeed back, with another cinematic and evocative collection of heavily vibing ambient dreampop. The London-based duo's new, hermetic EP Gaslamps feels even more of a piece than its remarkable debut, as its six gentle songs steadily swell and breathe into one another. Band founder Rhys Griffiths describes the set as "a northern European night time record," but we'd put a finer point on it: the proceedings would seem to be aural travelogue of sorts, or so the song titles suggest. Opener "Cityscape, Hauptbahnhof" is all gauzy shimmer, as much an array of slowly shifting thoughts as it is cycle of pretty, waivering chords. The reverie is briefly suspended by a stretching tone that suggests a far off police siren, and the listener is suddenly transported to the second composition, the more intently structured dreamer "Tram To Brockenheim." The second half of the EP contains the sort of haunting half-dreams that hang in your consciousness for mere moments upon waking; these come in the form of the 44 second sketch "View From" and its two-minute successor "Expedition To." Gaslamps was released as a digital download March 14 via French label Beko, a concern that has also released music by the previously Hotnessed The Bilinda Butchers, Drug Rug and others. Stream the entire set via the Bandcamp embed below, and click through to purchase the full EP.

>> Earlier in 2014 we deemed Heavy Midgets' superlative LP Super Kings the first excellent surprise of the year, and now the label responsible for it, Richmond's Bad Grrrl Records, extends its streak of hot releases from the area's best DIY guitar bands with a new long player from reliable scene mainstays Tungs. Tungs' weirdly wonderful Not For Grandma finds the trio further pushing sonic boundaries and contorting its influences, as it has since debuting in 2010 with a set called Sleeping. More so than any of its prior collections, Not For Grandma catalogs the band's whims like a mixtape. Surprises abound -- we recommend going straight to the deep cut "Eggsack" and sticking around for the completely demented saxophone that abducts the song in its final 90 seconds -- as each song seems to almost inhabit a separate universe. Single "Roses" is an aggressive, minute-long punker in the vein of early '80s Black Flag, with plenty of palm muting, echoey vocals and a slick delay-time spin in the final seconds as the tune collapses. The threesome shifts gears hard for the following track "Geebus," whose clean guitar chops and falsetto vocals mark it as an R&B-tinged guitar-pop jam until thick distortion overtakes the tune in the chorus. Most impressive is the four-song stretch from "Bone Dry" to the doomy (but strangely gleeful) "Flesh Light," which posits an alternate reality in which punky, Bleach-era Nirvana and the darker, bent string, drop-D-tuned Pac. Northwest grunge were never watered down following Cobain & Co.'s rise to superstardom. All four of the songs revel in the classic fuzz of alternative America's '80s heyday, and the serrated and slack nature (check the goofy closer "Me Fucking You") of it all is as cathartic as it is oddly comforting. Not For Grandma is available from Bad Grrrl now on CD, tape and vinyl via this Bandcamp page. Stream all of the long-player via the embed below.

>> Tapes & Tubes' music is meditative and sturdily constructed, and it has a timeless quality that has a lot to do with great songcraft and probably a bit to do with the manner in which it is recorded, too. The act is the project of Olympia, Wash.-'s Austin Potter, a home recording and analog sound enthusiast whose love for the dreamier and more sedate side of Yo La Tengo (or, by extension, greatly underrated Brits It Hugs Back) is readily ascertained by listening to the recent collection Ebb Tide. Throughout the contemplative, 10-song set boxy, minimal drumming, organ and Mr. Potter's quiet vocals routinely work in tandem to create vividly murky moods and a sense of broad possibility. The collection offers affirmative nods in the direction of Lou Reed and Bob Dylan, in the form of covers of "I Remember You" and "God Knows," respectively. The former is a relatively deep cut from Reed's 1986 set Mistrial, which is widely considered to be, well, the album before the one that had everyone proclaiming (rightfully) that Lou Reed was "back" (that would be the 1989 opus New York). The original has its charms, but Potter's reinvention of "I Remember You" succeeds via its understated restraint: Reed's bouncy guitar is kept, but the awful canned rhythm tracks scrapped. The new interpretation gives a sense of the reasoned smarts Potter brings to a song, and those smarts are evidenced throughout Ebb Tide. "Beginning" echoes to a certain extent Yo La Tengo's masterful "On Our Way To Fall," but Potter's whispered vocals, almost impossibly, feel even more intimate than those of Ira Kaplan. The whirling drone of organ on Tapes & Tubes' "Haunted House" may be a little too perfect, but it goes far toward establishing a sheets-of-rain-down-the-windshield vibe as well as the tune's steady groove. Grooves aren't always a necessity, however: the shimmering ambient guitar exploration "Solo Guitar Two" is pretty and enchanting, and indicates that the music of Tapes & Tubes may be increasingly potent the more minimal its approach. Ebb Tide was self-released last month and is available as a digital download via Bandcamp; plans are in place for a limited-edition cassette release as well. An even newer short collection titled Amplifer is already on offer right here.