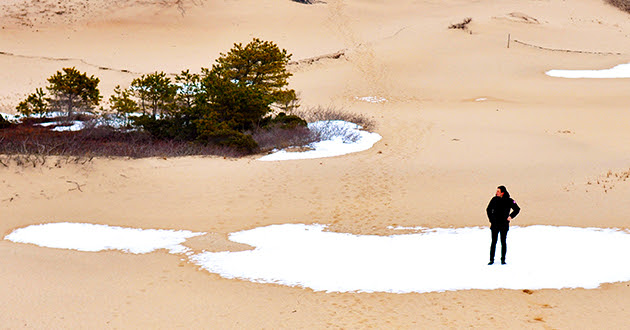 >> To a remote observer it may appear as if Boston indie pop heroes Bent Shapes are going through a sort-of wilderness phase, figuratively wandering the desert with one arm thrown over the shoulder of Jesus and the other over the shoulder of Jim Morrison, and, since we're just making shit up now, a superfluous third arm thrown over the shoulder of the equally superfluous Val Kilmer. Anyway, longtime Bent Shapes bassist Supriya Gunda recently (and amicably) left the band to focus on other projects including the whipsmart quartet Lost Twin, and now we have before us a new solo EP from Bent Shapes drummer Andy Sadoway. The good news is that the state of the Bent Shapes union is strong, they continue to play shows (like last week's hotly tipped Bleeding Rainbow gig), and we're told there is new music coming, so everyone just keep your shirts on -- everything is cool. In the meantime, this EP from Mr. Sadoway isn't going to write about itself. The short set certainly sounds like a winner, if its title track is any indication. "Str8 Sh00ter" is built up like a house of cards from flappy acoustic guitar and minimal, tom-centric drumming, with lots of nifty, tremeloed electric guitar sprouting across the stereo field. Its resolutely breezy and somewhat innocent sounding surf-pop reminds Clicky Clicky of both the terrific (but, sadly, perhaps defunct?) Chicago act Distractions and zero-year left coast pop duo Jan And Dean. The Str8 Sh00ter EP also includes the Sadoway-penned and performed "You Kept Things In Tact," "Don't Mind," and "Leave Some Space." The four songs were recorded at Mystic Steamship just outside of Boston. The EP will be released by Father/Daughter Records March 25 as a cassette and digital download, and you can pre-order your very own right here right now. Father/Daughter also released Bent Shapes' full-length debut, which we reviewed right here last August. Stream the tune "Str8 Sh00ter" via the Soundcloud embed below.

>> The music of Boston-based experimental concern Skyjelly rarely, if ever, seems to tread the same ground twice: indeed, unpredictability may be its most distinguishing characteristic. Our unsubstantiated speculation points to this unpredictability being a symptom of the sort of restless pursuit of T+B our college professors advocated in the '90s (that's "Truth and Beauty," to you youngsters not fortunate enough to have been educated by academics who themselves were educated in the 1970s). Or it may be that founding member Skyjelly Jones just gets bored easily (the musical project that carries the Skyjelly brand now also includes Eric Hudson). Whatever the reason, the peripatetic yen of Mr. Jones' songwriting has heretofore come to rest on beautiful, more ambient sounds like "Providence," which we wrote about here in early 2013, and on a new, debut EP, well, it's decidedly weirder. The music on the Skyjelly & Sun EP retains a wide-eyed psychedelia, to be sure, but aspects of the proceedings are surprisingly formalized. Opener "Tea, The Drink" cuts through a funk sample to stride along a solid groove accented by maracas(or some sort of backwards masking that approximates the slanting kiss-kiss of maracas). It's a firm anchor for cooed falsetto vocals and tremeloed rhythm guitar, which dodge gestural, scrawled guitar leads. "Catherine's Rabbi" ups the tempo and the pop ciphering, consolidating a barely there guitar sketch, a canned beat and more weightless falsetto in the four-song set's most conventional composition. "Krilltastic" tantalizes with its Clicky Clicky-friendly title, but the dense rhythm track in the first half of the tune -- which recalls moments of The Cure's Pornography record -- provides an equally strong focal point. Skyjelly & Sun will be self-released March 20, and if you are lucky enough to get a physical copy, it may (or may not) come packaged in a pocket cut from a pair of trousers. The EP will be feted at a release party scheduled for March 15 at the UnchARTed Gallery [boing] in Lowell, Mass. In the meantime, stream the sitar- and WTF-tastic EP closer "Peshawar (Astral)" via the Soundcloud embed below.

>> Pink Floyd never grooved as steadfastly as this, likely because Roger Waters is a rigid bass player. Nonetheless, there is a touch of classic, singles-era Pink Floyd to Pastel Colours' blazing psych-pop nugget "She Can't Decide." Something in the vocals, bass flange, blues foundation, and of course the massive descending chorus echoes Pink Floyd's "Interstellar Overdrive." Pastel Colours' smoking psych-rock number is apparently only their second recording; the Falmouth, England-based quintet debuted with the somewhat more restrained but somehow even more psychedelic track "Hands Like Silk" late last year. "She Can't Decide" is the third installment in Art Is Hard Records' 2014 Pizza Club series, with which readers will surely be familiar, because we write about it, and Art Is Hard's knack for finding brilliant music, often. Coincidentally, another Falmouth act, Goddamn Nobody, was featured as the first single in the 2014 Pizza Club series, and we wrote about that right here. Despite having but a brace of tunes released, Pastel Colours has already garnered a not insignificant amount of radio support, and we are eager to hear what else the fivesome can do. Can they stay true to the psych-pop idiom while keeping its music fresh? Time will tell. For now, stream "She Can't Decide" via the Soundcloud embed below, and click through to grab a download of the track for the friendly price of zero anythings. And, of course, music fans would be wise to keep their ears on Art Is Hard.