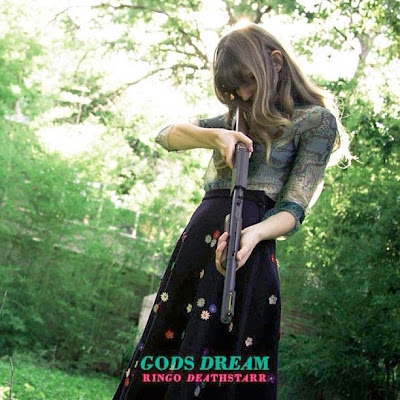 Having attained the contemporary American noise-pop throne via cracking songwriting, fully-realized recordings and years of DIY hustle that has seen the band touring far from its native Austin, Ringo Deathstarr's latest long-player finds the trio both firmly in control and delightfully at ease. The act's resplendent new EP God's Dream stretches out the tempos and melodies into the luxurious high of an after party, making the short collection an envelope-pushing victory lap that both sets and confounds expectations for the band's next long-player.

Opener and highlight "Bong Load" sets the stage from the shoegazing act's Olympus Mons. Druggy, woozy, even bratty (given guitarist Elliot Frazier's punky opening vocal turn), the song neatly restates the strengths Ringo Deathstarr has perfected on its prior full lengths and EPs. There's the vocal trade-offs of the lead melody between Mr. Frazier and bassist Alex Gehring, the live-yet-synthetic feel of the shuffling drums, and a potent instrumental bliss-out closer. In a bit of tasteful indulgence, Frazier introduces a relatively new tool in his arsenal, the conventional guitar solo, just past the one-minute mark. There a harmonized, slow-burning lead guitar temporarily subsumes the track, like the legendary J Mascis at his unbridled best. The lyrics and sleaze of "Bong Load" also remind the listener of Ringo Deathstarr's sense of humor, a quality unfortunately absent from a lot of the music made by the threesome's sonic contemporaries.

"Chainsaw Morning" (which includes guitar contributions from current Smashing Pumpkins guitarist Jeff Schroeder) and "Flower Power" also shine brightly in the new set. Each song evidences a shift away from (our much loved) 2012 album Mauve and its post-punk whiplash and distorted bass, and toward the territory of early '90s Britpop and grunge. The former tune leaps from a metal guitar section (that could have been played by Soundgarden) to a verse and chorus that carry the big-studio brightness and neo-psych qualities of late-period The Jesus and Mary Chain or even earlier Spiritualized. As evidence of Ringo Deathstarr's near-euphoric freedom to collaborate and experiment, the band even applies a Genesis-styled flanged drum break ahead of the final chorus. "Flower Power," which features guest guitar work from Swervedriver's Adam Franklin, continues in the vein of Seattle-styled riffage and thrash that comes as a surprise when considered in the context the classical shoegaze purism of the Deathstarr's 2009 full length Colour Trip.

Over the course of God's Dream, the songs investigate slightly different sonic directions, from sillier, slap-dash punk to the odd, quiet R&B confessional of "Shut Your Eyes." The takeaway is that the state of the Ringo Deathstarr union is presently so strong that it can playfully explore, while retaining its characteristic, effects-laden approach, impressive command of the studio, and pop songcraft. It also means that fans can expect everything and anything from a hopefully inevitable LP 3. God's Dream is available now from Neon Sigh, Noyes and Japan's Vinyl Junkie Records. The first pressing of the vinyl was in an edition of 500 flat, grooved circles; the first 100 mail orders of same were fulfilled with blended mint green/hot pink vinyl, according to Noyes, and those are apparently already sold out. The remaining 400 LPs were to be sold by the band on its recent 29-date US tour; additional pressings are already contemplated, and based on information at the Neon Sigh Bandcamp, those are apparently on transparent red vinyl and transparent coke-bottle green vinyl. Collect them all! Confuse your family. -- Edward Charlton