Review: Built To Spill | You In Reverse 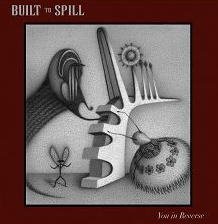 Has Built To Spill principal Doug Martsch rediscovered the pop song? Did his 2002 solo foray into blues forms invigorate his songwriting? Is You In Reverse awesome? And how does a guitar player detach a retina? These are the big questions this week for Martsch and his current trio of longtime collaborators. Particularly if you aren't one of the bazillion people who have already feasted on a leaked version of Built To Spill's lucky seventh full-length in its 13 year career, its first new set in five uncertain years. You In Reverse relies upon even shares of Martsch's early '90s indie pop focus and his later, more spacious and jammy music to deliver what will inevitably be referred to by many (particularly those unhip knobs in print music journalism) as the cliched "return to form."

Album opener "Goin' Against Your Mind" confidently strides in on a desperate one-two before fracturing into a few minutes of tight soloing. Distorted guitar surfs reverbed crests before the jam rejoins the verse-chorus-verse that made us adherents to Martsch's musical world view many, many years ago. "Liar" recasts the old BTS classic "Joyride" from a celebration of the here and now to a mourning of the there and then. "Wherever You Go" takes a page from Perfect From Now On's atmospheric instrospection, while the uptempo rocker "Conventional Wisdom" approaches the level of energy that Martsch hasn't mustered since the early '90s. Granted, there's no "Liquid Boy" or "Distopian Dream Girl" among the cuts that comprise You In Reverse, but there is ample evidence of a spark that has appeared only rarely in Martsch's music in the last few records. So the answers to our opening questions? Not as straightforward as we'd like them to be, but they are: Not quite; It could be; It's not awesome, but it's really very good; and Yeah, we don't know either.