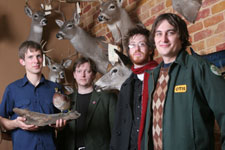 >> Texas concept rockers Okkervil River apparently spent 10 days in February (not Two Days In February, a la the Goo Goo Dolls) recording 22 new tracks that they have no intentions of ever releasing. Double what? Also, the bands twin epics Black Sheep Boy and the even more amazing Black Sheep Boy Appendix are getting the double-disc treatment for release in Europe April 28 by Virgin. Via CBS and Chromewaves.

>> Tim Bracy of indie rock rapscallions The Mendoza Line says on his blog here that the band is recording tracks for a much-delayed EP this weekend. From Mr. Bracy's comments to his post: "As for the songwriting, I basically can't finish anything effectively without deadlines. The songs are WRITTEN, they just need to be massively edited and made into some kind of palatable form. I write songs pretty much every day when I'm not traveling, and they get very long and unwieldy. And unless a studio visit is pending, I just don't finish them. I keep adding and adding."

>> If it's raining where you live this week, why not devote some time to reading a bunch of music geeks nerd out over discussing Sonic Youth drummer Steve Shelley's playing style at this ILM thread.