In Memoriam: Joseph Hill of Culture 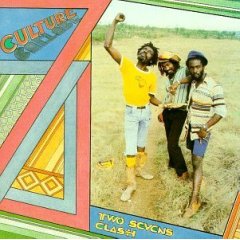 This post, while sad, also will keenly illustrate our ignorance of a body of work that certainly deserves better. But the fact is that our life has been far more influenced by punk than reggae. Still don't know what we're talking about? Pollstar here reports that Joseph Hill, the lead singer and songwriter of veteran Jamaican reggae act Culture, has died at age 57. The name of Culture's second single (and fourth full-length) was "Two Sevens Clash," the title of which was the inspiration for the name taken by British punk legends The Clash (we can't remember where we originally read that, but it is confirmed here in a BBC profile and vaguely disputed on page 119 of the amazingly detailed Clash biography "The Clash: Return Of The Last Gang In Town," which we highly recommend).

Culture recorded more than 30 albums since forming in 1976. Hill took ill in Berlin during the group's current European tour and died Saturday, according to the group's web site here; the band plans to finish out its commitments with Hill's son Kenyatta standing in. The web site also states, "Recently, Hill had received a number of honors - including an induction into the Jamaican Reggae Walk of Fame and a 2005 Independence Award presented by the Prime Minister of Jamaica. This year the group continued to draw rave reviews with typically upbeat performances at the 'Bob Marley 61st Birthday Celebration' in Ghana and 'Reggae Sunsplash 2006.'"
Posted by Unknown at 8/21/2006 09:23:00 PM