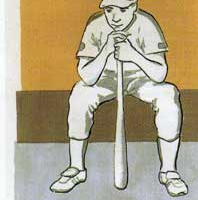 >> According to some recent commentary on Jon Solomon's fine radio show broadcast on WPRB Princeton, which you can stream here Wednesday nights, there will be a new Karl Hendricks Trio record out next year. We don't have any other details except that Mr. Hendricks will release the record himself. Hendricks, incidentally, was putting out indie rock records when many of you were probably still running around in short pants. The band's most recent record, The Jerks Win Again, was released by Merge in 2003. Here's the Merge biography, which is pretty thorough.

>> Billboard has the track listing for the soundtrack to the forthcoming documentary "American Hardcore," which we've discussed here and here previously. Rhino will issue the set via digital storefronts Sept. 26; discs will be in store Oct. 10. More info and the track listing, which includes cuts from Black Flag, Bad Brains and SS Decontrol, is at this link.

>> BrooklynVegan here points to information about a forthcoming record from Blonde Redhead. The still-untitled set will be issued by 4AD and hit racks sometime next year. The band's last release was 2004's Misery Is A Butterfly, which was also issued by 4AD.
Posted by Unknown at 8/28/2006 09:01:00 PM