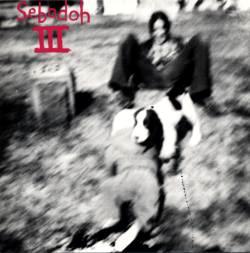 [We are pleased to welcome back friend and former colleague Jay Kumar to the virtual pages of :: clicky clicky ::. Mr. Kumar will review CDs here as his schedule allows. He recently launched the podcast Completely Conspicuous; previously he discussed Sloan and other things Canadian in this guest post. -- Ed.]

Ah, the Sebadoh. You can’t think “’90s indie rock” without thinking of the three-piece from western Massachusetts. Well, you can, but you shouldn’t. Primarily known by some as the band Lou Barlow started after he left Dinosaur Jr., Sebadoh was originally more influenced by Eric Gaffney’s material than Barlow’s. Sebadoh III was the band’s first full-length and although it may have been overshadowed upon its release in late 1991 by some album called Nevermind, it was pretty influential in its own right. It helped introduce lo-fi indie rock, wavering between Barlow’s acoustic, sensitive guy songs, Gaffney’s explosive noise collages, and drummer Jason Loewenstein’s low-key offerings. Standout tracks include Barlow’s “The Freed Pig” and “Truly Great Thing” and Gaffney’s “Violet Execution” and “Limb by Limb.”

In the new Sebadoh III reissue from Domino, the original 23-song album is remastered and packaged with great liner notes from all three band members and an 18-song second disc that includes the Gimme Indie Rock EP plus a whole treasure trove of unreleased material that represented the band’s sound leading up to the recording of Sebadoh III, Gaffney writes in the liner notes. The package is well worth picking up for anyone interested in capturing a moment in time; while Nirvana and its Seattle ilk were driving the hair bands off the radio, this album, along with Pavement’s Slanted and Enchanted, encouraged left-of-center artists to pick up a guitar and a four-track and start making their own music. Eventually, friction between Gaffney and Barlow led the former to leave the band several times, quitting for good in 1993 and leaving Barlow and Loewenstein to soldier on. They cranked out some decent albums throughout the rest of the decade, but none of them had as much impact as Sebadoh III. Domino released the reissue Aug. 8. -- Jay Kumar