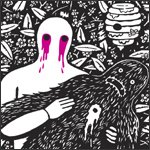 Off-kilter Chicago and Philadelphia-based post-rockers Icy Demons embrace an exciting variety of sounds utilizing jazz apparatus (vibes, overdriven organ) and modalities. A casual listen to the quintet's forthcoming set Tears Of A Clone inspires comparisons to older-model Aloha, back when that act's work could call to mind the Peter Gabriel-ified version of Genesis. But Icy Demons casts its sonic net (not its SonicNet) even more widely, pulling together strings, reeds, acoustic guitars, electronic beats and vocal harmonies into a smart and beguiling amalgamation that borders on singular. Even Eastern Developments label boss Scott Herren professes confusion at Icy Demon's curious sum total.

The five-year-old act, which features one-time/sometime members of Man Man, Bablicon and Need New Body, began as a more improvisational unit drawing from sounds as disparate as African music, Tropicalia and ambient compositions. Tears Of A Clone exhibits some reverence for all of these, and its songs lie somewhere on an axis between the aforementioned Genesis ("Golden Coin") and Herbie Hancock's electric jazz work ("Jump Off"). The record streets Sept. 12 on Eastern Developments; it was issued in Japan in May. The label also plans to reissue Icy Demons' 2004 set Fight Back by the end of the year, and you can stream tracks from both records at the band's MySpace drive thru here. The band's weird web site appears prepared to offer the reggae-fied jam "As It Comes" at some point, we guess just keep checking back if you get tired of streaming it at the MySpace joint. Icy Demons executed 10 days worth of shows in mid-July and will hopefully be touring more extensively before the end of 2006.
Posted by Unknown at 8/06/2006 09:01:00 PM