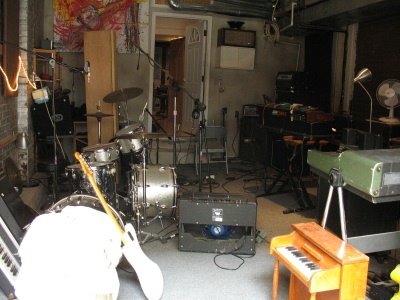 As best as we can remember, we discovered Philadelphia-based shoegaze act Relay as we have discovered several other superlative bands in the last year or so, via listening to the also Philadelphia-based Why Me? podcast (it might have been this episode, it might have been a different one). When we saw that the band had signed to stalwart indie label Bubble Core Records earlier this year, we knew that it would be going places and decided to check in. Bubble Core recently issued the quartet's Type/Void EP and on Oct. 3 it will release the band's full length Still Point Of Turning. We put our familiar battery of questions regarding all things practice space to Relay principal Jeff Ziegler (who, incidentally for our Boston readers, once lived in JP and attended Suffolk University). Below he obliges us with nice details about the space, which is situated near the City of Brotherly Love's Chinatown section, as well as tales of loudness and burning hair.

1. Why did you choose this space?

Well, this space was sort of a lucky break, as it's really the downstairs of the rather large apartment that myself and our keyboard player, Mikele, live in. I have a need for recording studio space, as well as practice space, and my landlord was selling our old apartment/studio in the increasingly annoying Northern Liberties area of Philadelphia, and he suggested we check this building out. We were blown away by its size and unique layout. It works out really well, in that there's the practice space, which also doubles as a tracking room for our studio, a middle foyer area, and then a separate control room, all of which take up about 900 square feet. Then upstairs you've got 2 bedrooms, a big open kitchen/living room area, and a "repair shop" of sorts, used by the building's other resident, Mike Pecchio, a recording engineer (Holopaw, An Albatross) and ex-Neve repair tech. So, it's great in that it totally integrates making music in to our daily lives. I can't imagine not living adjacent to my recording and practice area, really. I've been doing it for the last 8 years.

2. Explain how an idiosyncracy or quirk of this space or a former practice space has affected a song, or even your overall sound.

Well, we're a pretty loud band, and since our practice space has rather high tin ceilings that amplify the sound and wash everything out, I think we've gradually become more comfortable turning down a bit so we can hear what's going on little better. We're still far from quiet, but I think it's been more of a battle to play loud and comfortably in this space than it was in our previous one, and it's probably to everyone's benefit that we've chilled out a bit.

The faint odor of burnt hair -- our only neighbor is a hair salon...

4. You've got an upcoming full length coming out on Bubble Core, whose The 1st Bubble Core Records Sampler is among our favorite label comps. Is there a Bubble Core act that you guys have a particular affinity for?

Mice Parade and The Swirlies are some personal favorites, although
we're big fans of everyone on the roster.

We have a full length coming out on Bubble Core in October, and will be doing a lot of touring to support both the LP and the Type/Void EP [which appears to have been engineered in part by Mazarin's Quentin Stoltzfus -- Ed.] that's already out. Other than that... probably a lot of writing, recording, refining and working. We all have other musical projects that we're involved in besides Relay, and those will be getting some attention as time permits.

Email ThisBlogThis!Share to TwitterShare to FacebookShare to Pinterest
Labels: Arc In Round, Relay, ShowUsYours

Great interview. I just discovered Relay myself when they recently played in DC. I was blown away and instantly was a fan. Been searching around to see if they had anything else out beyond the two excellent Bubblecore releases. That's how I found this interview. Thanks for sharing this.