I Only Talk About You: Muxtape Numero Cuatro 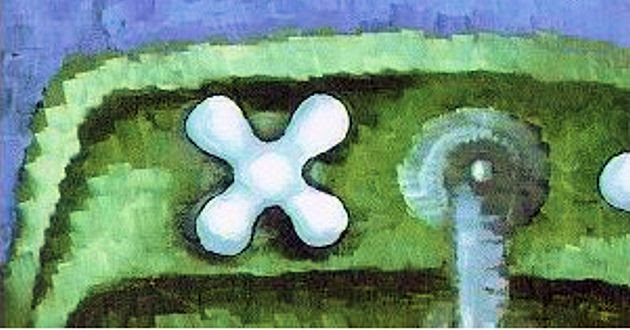 We're a little late with the weekly Muxtape, but we hope you'll agree the extra time resulted in an incremental increase in quality. We've unearthed rarities, elevated the under-known or under-appreciated, and celebrated the obviously worthy. Click this link to listen in, and read below for the play-by-play.

1. Mclusky -- She Will Only Bring You Happiness -- Mcluskyism
(at first it is a bit hard to believe that this is from the same band that brought us the undeniable and apocalyptic screamer "Light Saber C*ck Sucking Blues." But the band reveals its true colors with a snicker at the end of this relatively breezy pop gem when it confesses its old singer is a sex criminal. Everybody always asks us whose track this is whenever it comes on. It's that good.)

2. Up Up Down Down Left Right Left Right B A B A Start -- Janet Bateman -- Girls Names EP
(not the track we intended to upload -- all those girls' names get mixed up in our head. That said, every track is a winner on this Jersey band's EP, and on most of their EPs and records for that matter.)

3. Superchunk -- Unbelievable Things -- Indoor Living
(Is it a coda? Whatever it is, when Mac gets to the part where he sings "I'm starting to believe," it is transformative. We're still not sure when exactly indoor living was all the rage, but we expect it is popular with different people at different times. No Superchunk album as a whole thrills us the way On The Mouth did, but Indoor Living certainly has its share of high points, although we have to confess weathering some dissatisfaction as the pop tendencies began to creep into Mac's music around this time.)

4. Seaweed -- Bill (Live) -- Internation Pop Underground comp
(this song immediately inspired in us a desire to like Seaweed a lot. But besides this track and the cover of Beat Happening's "Foggy Eyes" on the Fortune Cookie Prize comp, we've never been able to get on board with the band. But the fact that the band has recorded what we consider to be two monumental tracks is no small feat.)

5. The Replacements -- Left Of The Dial (Live) -- More Sh*t For The Fans
(a very nice recording and performance of one of the most important rock songs ever. We hate when people cordon off the so-called "post-punk era" when making such claims. This song doesn't need to be handicapped, it doesn't need you to lace your fingers and give it a boost: it's Beatles good, it's Stones good, it's Zep good, it's Pistols good...)

6. The Joey Sweeney -- Pull The Lever Down -- Girl's High
(oh how we wish this record was released. We finally got nice digital files a couple years ago so we could rock out like it was 1995 every day. Mr. Sweeney had many great performers at his side over the years and a number of notable lineups, but he never rocked before or after like he did when he had a Radnor High School-bred rhythm section.)

7. Vehicle Flips -- Steelers' Fight Song -- In Action
(this song is heavily associated with autumn for us, but it is so good we can't ignore it the other nine months of the year. Perhaps the cold, wet weather this weekend has brought it prematurely to the fore of our mind. In Action is out of print and we had to beg the wider BCO population for a copy several years ago and thankfully someone obliged us. Sturdy indie pop, a bit more grown up than twee. Incidentally, we like to believe there is some nexus between the Vehicle Flips track "Potomac" and Eggs' "Evanston, Ill.")

8. Varsity Drag -- Summertime -- For Crying Out Loud
(we've covered Ben and Lisa Deily's Varsity Drag in recent months, and this song is strong evidence why. The funniest comment about the Drag's 2006 set For Crying Out Loud is "Wow, you can really tell the record was recorded in a...er...metal shipping container." Even the blunt recording can't dull the hooks in this tune, and as the weather warms up, we can't help but sing along even when it isn't on.)

9. Superman Revenge Squad -- Angriest Dog In The World -- God Is In The TV digital single
(unbridled emotion. Remarkably, this song about the angriest dog is among the saddest of the many sad songs written by England's Ben Parker, whose work is regularly stunning and whose musical accomplishments should certainly be more widely celebrated).

10. Hypo -- Nice Day
(this very pleasant electronic track came off a compilation whose title and derivation has long since escaped us. But Google reminds us Hypo, which we think was Japanese or at least included a Japanese singer, recorded for the small Parisian label Active Suspension, which also has released recordings by Domotic. Google also reveals to us that the Active Suspension web site now features a delightful animated Bigfoot. Check it out.)

11. The Warlocks -- Dreamless Days -- Heavy Deavy Skull Lover
(we wish this song was an hour long. So sleepy and reverby and yet riveting.)

12. Shannon Worrell -- Deep Sea Swimmer -- The Moviegoer outtake
(we've never understood what Shannon Worrell is talking about here, but the track itself seems like a lullabye. This track didn't make it on her 2000 release The Moviegoer, and we wouldn't have even known about it if it hadn't been for Mr. Mystical Beast having encountered some CDs out for the trash one day in Brooklyn and deciding to pick them up. Time was we were whiling away our early 20s in Virginia and Ms. Worrell was our boss' wife. Certain folks may recall she formerly was the songwriting and guitar-playing half of the duo September 67. We just learned that she is finally recording a new record; we'll have more about that later in the week.)