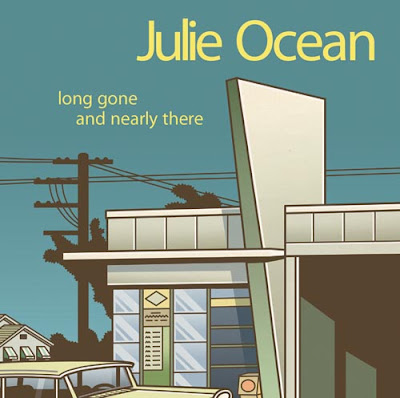 >> [UPDATE: We have a winner -- congratulations Jake Oomar!]One of the bigger records of the year to date is Julie Ocean's immaculate indie pop gem Long Gone And Nearly There. The D.C.-based act's debut long-player isn't due in stores until May 27, but as of today it is available on ITunes and EMusic. Readers may recall we reviewed the record here in early April, at which time we said -- among other things -- that "the relatively new quartet succeeds marvelously, as evidenced by the exuberant and winsome indie pop..." Through the magic of multiple publicists working the record -- which is being released by Philadelphia powerpop label Transit Of Venus -- we've got a copy to give away and we're giving it away right now. The first reader to email us (our email is in the sidebar) with the phrase "Ghost In The Mirror" in the subject line will receive a brand spanking new copy of the CD from us in the mail next week. It's that simple. We'll update this item as soon as there is a winner. If you're itching to see Julie Ocean -- which incidentally features former members of Velocity Girl, Glo-worm and Swiz -- ply their pop in a live performance, the band has two live engagements booked: a CD release show at Iota in Arlington, Virginia on the 6th; and a gig with Half Japanese at Rock And Roll Hotel in D.C. July 11. If you want to try before you buy -- or try before you win -- here once again is the MP3 for the infectious toe-tapper "Number 1 Song" below.