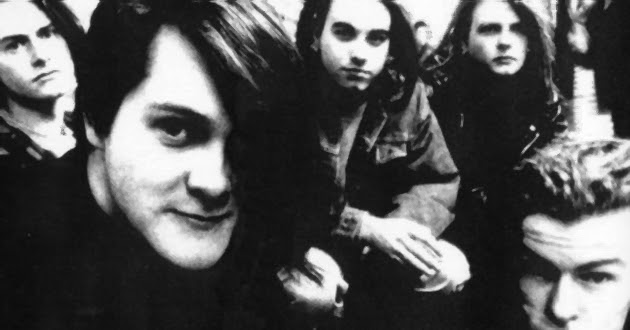 >> [PHOTO CREDIT: Steve Gullick] We always feel like we have to defend our appreciation for Ned's Atomic Dustbin. We certainly can understand any sort of criticism of the N.A.D. t-shirt we once owned, particularly after we cut the sleeves off, but we expect such a fashion disaster can be chalked up to the confusing times. Mind you, this was an era during which we briefly owned purple overalls (they were "grungy," not "hip-hoppy"). For serious. But anyway, Ned's wrote some great indie rock songs, not the least of which is "Happy" from the band's 1991 full-length debut God Fodder. Twitter scrapers have seen the glee we experienced digging up video clips for the track Saturday. And so it was we stood up and took notice when the venerable NME reported here that the band would reform for a gig this winter. Of course, in perusing the offerings on YouTube Saturday that news is somewhat deflated by the fact that -- based on the videos we found -- the band had already reformed and played at least two gigs (Glastonbury, Stourbridge) last year. In fact, according to Wikipedia, the band plays a Christmas show *every year.* So there you go: a short story about N.A.D. reforming that is not really even a "story" at all in the journalistic sense. Oh wait, according to MySpace this year's reunion is, in fact, notable, in that it features the OL, a/k/a The Original Lineup. More details here. And here are links to the aforementioned clips that we enjoyed viewing: 1, 2.

>> We keep an eye on the efforts of indie folkster Josh Rouse, whose records Subtitulo and Country Mouse, City House are downright pleasant listens. So it was with interest that we read of Mr. Rouse's subscription service. This sort of digitally facilitated artist/fan relationship was something that interested our editors (and us) when we toiled away at a dot-com at the turn of the century. At the time the men at the vanguard of the movement were Todd Rundgren (hello, it's him; his dealy was called PatroNet), Robert Fripp (his dealy was called Disciplined Global Mobile) and Pat DiNizio of The Smithereens (we can't remember what his dealy was called). Anyway, according to Coolfer, Rouse's enterprise is called Bedroom Classics Closet Archives and it features a members-only download site including access to music and video for more than 100 songs. Certain subscribers get access to special albums and EPs. There are different membership tiers planned, although right now the only tier apparently available is $100 per annum. All very interesting, and the kind of thing we'd like to see a few of our favorite artists do. Read more details at the Coolfer post here. And here's the lead track from Mr. Rouse's 2005 set.

>> As we tick down the days until June 2, when Johnny Foreigner's full-length debut hits stores in the U.K., we have been trying to ignore the leak of the album to the Internerds. But, in the interest of science, of course, we've heard a couple of the tracks. None of them have blown us away, but they are solid. We expect we'll be excited about the whole thing when it arrives, along with the single of "Eyes Wide Terrified," which we think streets tomorrow. Since we've ordered both the record and the single from the U.K., who knows when they will actually arrive, but it can't possibly take any longer than HMV. So we wait. One bright spot was guitarist and singer Alexei Berrow's song-by-song rundown of what to expect on the Birmingham, England-based trio's full-length, Waited Up 'Til It Was Light, which was published in Drowned In Sound here last week or the week before. It has somewhat taken the mystery out of the songs, but we expect they will stand up just fine without the added mystique.

>> Emusic's 17 Dots blog reports here that the digital music service will soon offer the catalog of highly regarded German electronic label Kompakt. We are excited about this because we are eager to acquire the five or so editions of the annual Pop Ambient compilation that we don't own. They were just so expensive as imports we gave up the chase, even gave up the scouring of the EBays and et ceteras of the electronic realm. 17 Dots says the acquisition of the catalog will be gradual, but, hey, we're patient.
Posted by Unknown at 5/19/2008 08:45:00 AM