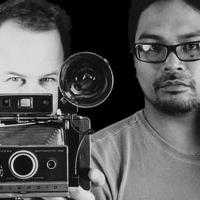 >> We've been avoiding exploring Whysall Lane for no good reason. Perhaps we weren't ready to hear Richard Baluyut move on, although we think he's had other stuff going on since '90s standard bearers Versus, creators of the stunning record The Stars Are Insane, ran their course. We finally hit the MySpace link we've been sitting on since The 'Nac posted it months ago and we were pleased with the punk spunk ("Time Machine") and amped-up Beatles influences ("Pillows") we heard. In Whysall Lane, Baluyet is abetted by former Jawbreaker drummer Adam Pfahler and bassist Mikel Delgado. Whysall Lane's debut on Blackball Records was supposed to street last month, but we don't think it did. According to the band's site you can already mailorder it, though.

>> Chicago-based indie quintet Track A Tiger began as the brainchild of one Jim Vallet. The act's moody folk rock absconds with the occasional chamber pop or electronic element, but primarily stands tall based on its patient, arresting songwriting. Standout track "Seashaken Heart," posted at the band's MySpace lean-to, is a subdued mid-tempo strummer beautifully augmented with guy/girl vocals, viola and chimes. We're not sure the band we're about to reference is canonical enough to warrant use as a referent, but "Seashaken Heart" recalls some of the mellower tracks of Dirty On Purpose's 2005 EP Sleep Late For A Better Tomorrow. Track A Tiger's debut Woke Up Early The Day I Died streeted Feb. 28.

>> Dunedin, New Zealand's The Dark Beaks sound like throwbacks to the American college rock scene of the late '80s, before (or at least it seemed this way to our youthful ears) every band felt beholden to a style or genre. Which isn't to say the act has no style. There's something very endearing in the band's sorta lo-fi, sorta jammy tunes with uncertain vocals. It makes us think of forgotten regional acts like suburban Philadelphia's Statues And Monuments or Orange County, Calif.'s Primitive Painters. We're particularly taken with the track "Dream About You." You can stream that song and others at The Dark Beaks' MySpace casa here, and the video is at YouTube. We dig it because the oversaturated image quality gives the video a real classic Psychedelic Furs look. The Dark Beaks' debut Spill Your Heart was released Feb. 16. Here's the video: