Today's Hotness: Anything That Has Nothing To Do With SXSW 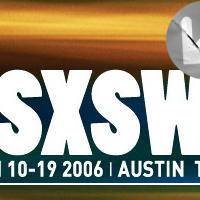 >> You know what, South By Southwest? We don't care. We might care if we lived in Austin. But we live in another major North American city, certainly more major than Austin, and within about a dozen blocks of two of the city's major indie rock venues. And you know what? We still blow off shows at an alarming rate. Call us homebodies. We suspect we'd have an awesome time if we did make the trek to Texas one year, but we also suspect there are far more people NOT going to the festival each year than there are who go. Who's catering to us? What about OUR needs? Where are the anti-SXSW shows and parties? If there are any in Boston, we might show up. Or maybe we'll just blow it off.

>> Domino will issue Tuesday a new record from British blues-rockin' clicky clicky faves Archie Bronson Outfit. There's a fine mini site for the platter that lets you stream clips of all the tracks, as well as a video for the band's recent single "Dart For My Sweetheart." The single's got our favorite "na na na" chorus of the year to date. Check it out here.

>> A bunch of bands got signed in the last couple of weeks. It's sort of like they had the equivalent of a pro sports draft. Oxford Collapse went to Sub Pop in the first round [news]. Atlanta's Snowden went to Jade Tree [news]. Danielle Stech Homsy went to Gnomonsong [well, it's not there yet, but watch this space].

>> This slipped under our radar. Norwegian electro luminaries Royskopp will release a live EP fittingly titled Royskopp's Night Out March 21. The 40-minute set was recorded in Oslo in November and it spans much of the act's career. The performance includes a Queens Of The Stone Age cover, believe it or not.
Posted by Unknown at 3/12/2006 01:03:00 PM